A first of its kind service in Asia, Tata Sky ShortsTV, will provide about 600 hours of unconventional and captivating short format stories on a single platform that can be accessed on-the-go. 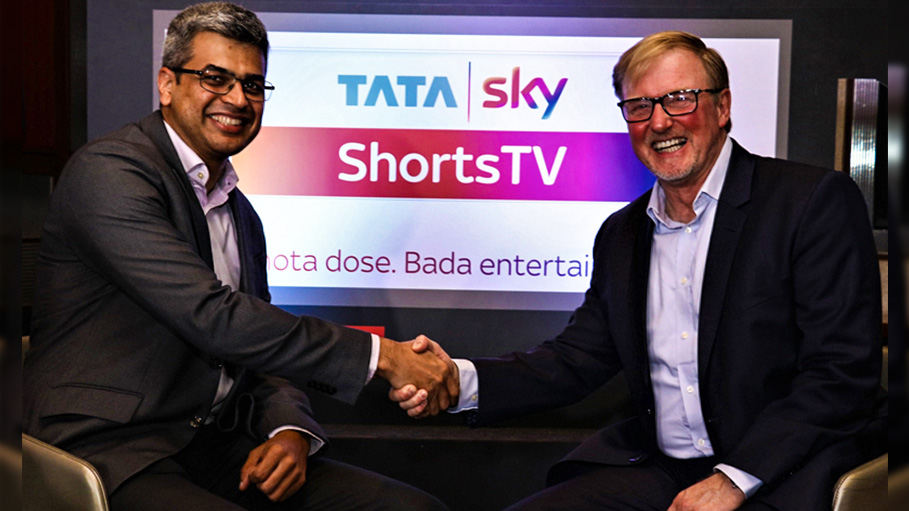 Tata Sky, India’s leading content distribution platform and innovator on Tuesday firmed up a partnership with ShortsTV, the world’s first and only 24/7 TV channel dedicated to short films. The newly launched Tata Sky ShortsTV is India’s first ever curated platform for short stories and films. A first of its kind service in Asia, Tata Sky ShortsTV, will provide about 600 hours of unconventional and captivating short format stories on a single platform that can be accessed on-the-go.

Tata Sky ShortsTV will feature a line-up of 2000 premium titles, including the best of Oscars, Cannes etc. as well as a comprehensive collection of recent Indian short stories and films. Subscribers can look forward to an exciting mix of award winning and nominated short films covering a variety of genres such as comedy, drama, thriller, mystery, crime and adventure amongst others. This premium offering will be available to subscribers 24X7 on their television and the Tata Sky Mobile App.

Arun Unni, Chief Content Officer, Tata Sky said that as viewing habits evolve, short films have seen a huge surge in popularity across the world, including in India. Increasingly, prominent filmmakers & actors are using this creative medium to tell wonderful stories being watched by millions on the internet. However, there hasn’t been a single curated destination for the Indian consumer to watch this content. ‘Tata Sky ShortsTV’ aims to be that destination where a curated selection of 2000+ of the World’s best short films can be enjoyed on a 24X7 basis. Tata Sky is proud to partner with ShortsTV, who have worked hard for more than a year to localize the proposition with 500+ Indian short films.

Carter Pilcher, Chief Executive at Shorts International Ltd and member of the Academy of Motion Pictures said that they are also thrilled to partner with Tata Sky. They’re India’s cutting-edge content distributor and as their launch of Tata Sky ShortsTV proves, they’re way ahead of the crowd. The new Tata Sky ShortsTV service is a fantastic addition to their value-added services portfolio and will be a huge success with millennial audiences and those who love the best movies. ShortsTV has also partnered with Royal Stag Barrel Select Large Short Films to bring a flood of India’s most original and powerful short films to Tata Sky ShortsTV.

Some of the international finds include among others God of Love, Bear Story, Atlantic, Henry, Borrowed Time, Curfew, Blood Money, A Sense of History, Neighbours, Walls, Blue Season, Midnight of My Life and Picture Paris. Also Chutney, Ahalya, Shunyata, Aamad, Kheer, Arre Baba, Urmi’s Cat, Naughty Amelia Jane are just some of the critically acclaimed films that will be available on the platform.