Located in the Sangkhla Buri district of Kanchanaburi, the Uttamanusorn Bridge also known as the Mon Bridge is a famous tourist destination for tourists from other parts of Thailand and from across the world. 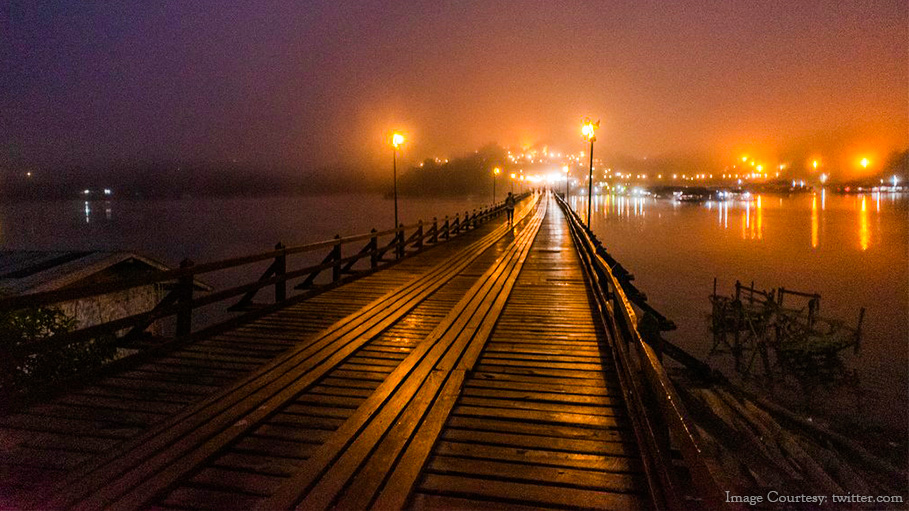 The Thai Army is keeping a close watch of the ‘Uttamanusorn Bridge’ over fears that the country’s longest wooden Bridge may collapse anytime, as the rains continue to play havoc in the country’s Kanchanaburi province.

Located in the Sangkhla Buri district of Kanchanaburi, the Uttamanusorn Bridge also known as the Mon Bridge is a famous tourist destination for tourists from other parts of Thailand and from across the world.

Colonel Saratvuth Chaisith, who is the commander of the 29th infantry regiment based in Kanchanaburi, has informed the media that he has instructed his Army to stay vigil, as the bridge may collapse anytime under the force of strong currents in the Songkalia River and also because of huge amount of debris which are piling up against its structure.

In order to remove the debris, mostly tree branches and logs, which are washed out of the jungle, are restricting the flow of water under the bridge, the Thai Army has been using motorboats, troops and volunteers. Colonel Saratvuth said, “The pressure of the water will increase and could force the wooden bridge to collapse, as in similar incident on July 28, 2013 when the midsection of the bridge collapsed”.

For more than two weeks, heavy rain has been falling in the Tanasserim mountain range area, which shares a common border with Myanmar, thereby sending runoff from swollen streams into the Songkalia and Runtee rivers.

Colonel Saratvuth also added that his troops are on standby to help the ethnic Mon people in the Ban Sanaefong and Ban Koh Satoeng in Tambon Laiwo, Sangkhla Buri district. These localities are most vulnerable to flooding and suffer heavy loss every year during the rainy season.

Uttamanusorn Bridge or ‘Uttama Memorial Bridge’ is commonly known as Mon Bridge or the Wooden Mon Bridge. The Mon Bridge is located in Tambon Nong Lu, in the Sangkhla Buri District in the northwest of Kanchanaburi Province of Thailand. The bridge is spread over the Songaria River.

The Bridge is named in the honor of Luangpho Uttama, a Mon Monk who was an abbot of Wat Wang Wiwekaram. He initiated the construction of this bridge in the year 1986 with local Mon workers. The bridge was completed the following year in 1987.

Uttamanusorn Bridge is considered a landmark and is one of the famous attractions of Kanchanaburi, which includes other tourist destinations such as River Kwai Bridge and Death Railway, Sai Yok Noi Waterfall and Three Pagodas Pass.

Every day, the locals walk across the bridge to make merit by giving food to the monks, as part of their daily routine. In the mid-2013, heavy rains and flash flooding flowing from Thung Yai Naresuan Wildlife Sanctuary destroyed the bridge. It was restored again in the year 2014.