The restored 76-year-old fighter has served during the World War II, but in the course of time, it has been de-militarized and stripped of its guns. 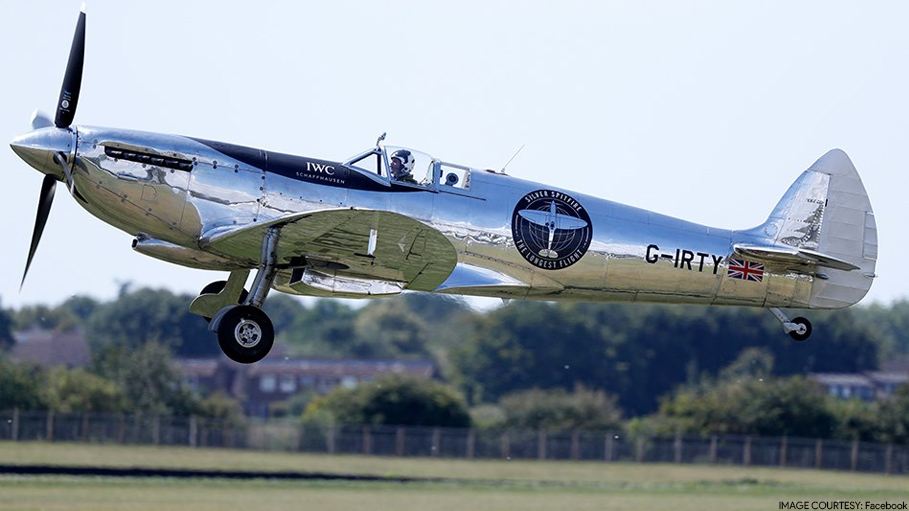 The iconic World War II fighter, an original Spitfire plane took off recently from Britain on an unprecedented attempt to fly across the world with the mission to inspire the future generation and show the plane to the world. The plane took off from the Good wood Aerodrome outside Chichester near the south coast of England for the first leg of its epic four-month-long journey.

The restored 76-year-old fighter has served during the World War II, but in the course of time, it has been de-militarized and stripped of its guns. Now with the paintwork, which also reveals its shinning beauty with silvery aluminum underneath also talks about its bravery and valour.

On the first stage of its attempt, the Silver Spitfire is heading towards Lossiemouth in Scotland crossing the Atlantic Ocean through Faroe Islands, Iceland, Greenland and the wilds of remote northern Canada. The single-seater plane aims to visit around 30 countries across the world and soar over some of the world’s most iconic landmarks.

British aviators Steve Brooks and Matt Jones, in turn, will control the 90-odd legs on its 43,500 km adventure around the globe. Speaking about the adventure, Matt Jones before the take-off said, “I am nervous and beginning to get excited. We are going to see so many people and so many countries. I hope it is successful and we get back. We want to show this plane off to the world”.

45-year-old Jones is flying the first leg, while 58-year-old Brooks is following the plane in another support plane.

Brooks also shared his experience saying, “We have been training for this for so long. I can’t wait to go. It is all about sharing the greatest aeroplane ever built. It is about inspiring the next generation. Life is tough and the Spitfire seems to symbolise that willingness to overcome against all odds”.

The restored MK.IX Spitfire’s original registration number is MJ271. It was built in Britain in the year 1943 by Vickers Super marine. The fighter aircraft flew on 51 combat missions, escorting bombers, conducting fighter sweeps over France and dive-bombing targets on the French coast.

Out of around 20,000 Spitfires so far built, less than 250 survive after World War II, with only 50 or so are still airworthy. But they hardly fly and mostly parked in Britain.

The plane was in a museum before. Its restoration work began in the year 2017, when all 80,000 rivets and parts of the plane were dismantled, checked, cleaned and restored for over two years.

The expedition, which is funded by Swiss watchmakers IWC Schaffhausen, will cross four major continents North America, Asia, the Middle East and Europe. The plane will also fly past some of the world’s most well-known sites, which includes the Grand Canyon, the Statue of Liberty, Mount Fuji, the Golden Gate Bridge and the Pyramids of Giza. It is expected to return to Good wood by the end of the year on December 8.