As it is believed that once a person is ordained as a novice, they get the merit, which is also extended, to their parents. The cave boys will donate their merit to the memory of Saman, the diver. 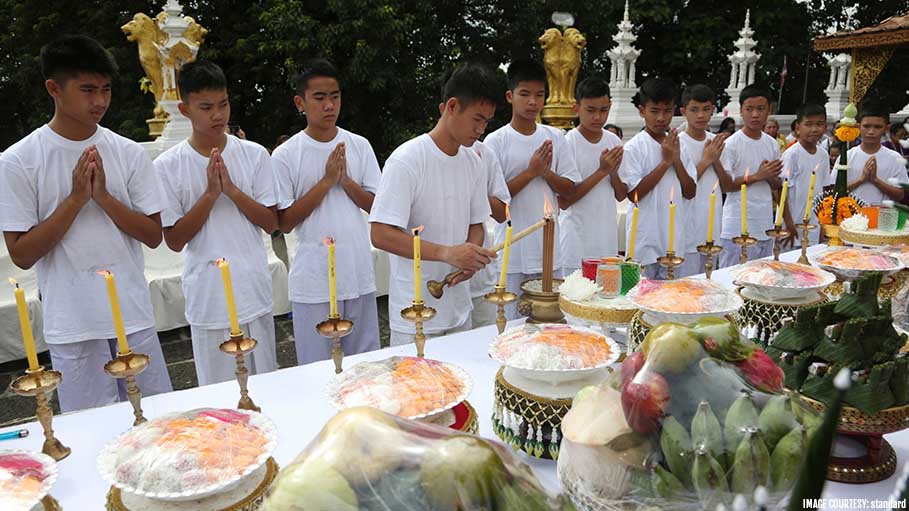 The star boys of Thailand, who were rescued from Tham Luang Cave of Chiang Rai province in northern Thailand, took their first step after recovery and ordained monkhood as novices in a special ceremony to carry forward the tradition.

The ceremony was broadcasted live through digital media and social networking channel like Facebook by local authorities. It is a process where all the 11 rescued boys will live in a Buddhist monastery for nine days. To carry forward the promise, which their families have made to thank the almighty for their safe return to home and in the memory of the Thai navy Seal, Saman Kunan, who died while rescuing the children.

Rachapol Ngamgrabuan, an official at Chiang Rai's provincial press office said, that “the eleven boys will be ordained as novices, the initial stage for monkhood, whereas Coach Ek will be directly ordained as a monk”.

Wearing white clothes, the boys prayed during the ceremony as a saffron-robed monk initiated the process of thanksgiving for their safe return home. The boys and their coach then lit a number of yellow candlesticks. The whole day ceremony was done at the Wat Phra That Doi Wao, a beautiful Buddhist Monastery at Chiang Rai district, from where the boys belong.

The boys, who are between the age group of 11 and 16 years will now live in the monastery for nine days, the same length of days and time, they were trapped in Tham Luang Cave in Chiang Rai before they were rescued by a team of divers. The coach, Ekapol Chantawong who had already lived in a Buddhist Monastery as a novice before for a decade is now directly ordained as a monk. Adul Sam-on, a 14-year-old boy among the team is not ordained as he is a Christian.

Mother of a rescued boy, Sangiemjit Wongsukchan said, “Ordinations are supposed to give us peace of mind. We can only do this for nine days because then he will have to go back to study and prepare for exams. Back to his normal life”.

Local residents too joined the ordination ceremony to show their solidarity with the group of boys, whose rescue operation for days had captivated people across the world.

In Thailand the male members of the society are expected to enter the monkhood often as novices, at least for once in their lifetime in order to show their gratitude, which they often do, towards their parents for raising them. As it is believed that once a person is ordained as a novice, they get the merit, which is also extended, to their parents. The cave boys will donate their merit to the memory of Saman, the diver.

The boys, who are a part of the soccer team “Wild Boar” and their 25-year-old coach Ekapol Chantawong had gone to explore the caves on June 23 where they got trapped as it was raining heavily. They survived for nine days inside the cave on water dripping from rocks, before divers located them on a muddy mound. The rescue operation involved divers and volunteers from all over the world, which finally ended on July 10 when the last boy of the group was brought out safely from inside the cave.