On Monday morning Kensington Palace announced the time when Prince Harry and Meghan Markle will tie the knot. 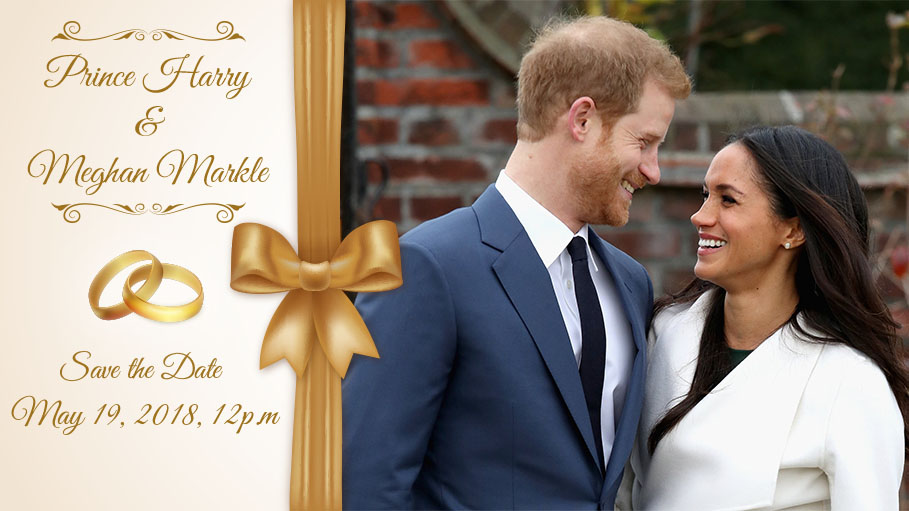 Finally the announcement all were waiting for has been made. On Monday morning Kensington Palace announced the time when Prince Harry and Meghan Markle will tie the knot. Their wedding will take place at 12 p.m. GMT (7 a.m. ET) on May 19, 2018. Earlier the day had been disclosed but the timing was not revealed.

The  Dean of Windsor, the Right Reverend David Conner and the Archbishop of Canterbury Justin Welby will be performing the marriage which will be held in St. George's Chapel at Windsor Castle.  The 800-seat venue within Windsor Castle, is at the centre of Windsor and just a short distance away from Eton College where Prince Harry went to school.

Prince Harry was baptised in the chapel in 1984.  Back in 2005, Harry’s father Prince Charles and the Duchess of Cornwall Camilla had their marriage blessing in the same venue after their register office ceremony.

The route of the procession which the newlyweds  will take after ceremony when they first emerge as husband and wife, has also been disclosed.

The people can have a view of the newlyweds when they set out on a journey in a carriage after the ceremony. The carriage with the newly married couple will leave Windsor Castle and travel through the small town of Windsor along the High Street. Windsor has  the world's oldest and largest inhabited castle. Queen Elizabeth II uses this castle on weekends.There is also a Gothic chapel which is the burial place of Henry VIII as well as 10 other monarchs.. The town which lies 25 miles west of London, has been a host to  royal weddings for centuries.

Immediately after the procession, the couple and guests will attend a reception at St. George's Hall, following which there will be  a private evening reception for friends and family hosted by Prince Charles, Harry's father.

Prince William and Kate Middleton’s wedding had taken place at Westminster Abbey in 2011 whereas his father, Prince Charles and Princess Diana, were married in 1981 at St. Paul's Cathedral.

The couple first met in July 2016 on a blind date set up by a mutual friend. However, they could spend time alone only when they went on a trip to Botswana.  Early November they announced their engagement. Prince Harry had designed the engagement ring himself and proposed to Meghan at Nottingham Cottage. The ring is from Botswana with two smaller diamonds which were from the collection of Princess Diana.

He once said that he wanted to include the diamonds to make sure she's(Diana) with them on their crazy  journey together.

Windsor is host to the world's oldest and largest inhabited castle. Queen Elizabeth II uses it on weekends. It has a Gothic chapel that is the final resting place of 10 monarchs, including Henry VIII. The town, 25 miles west of London, has put on royal weddings for centuries.