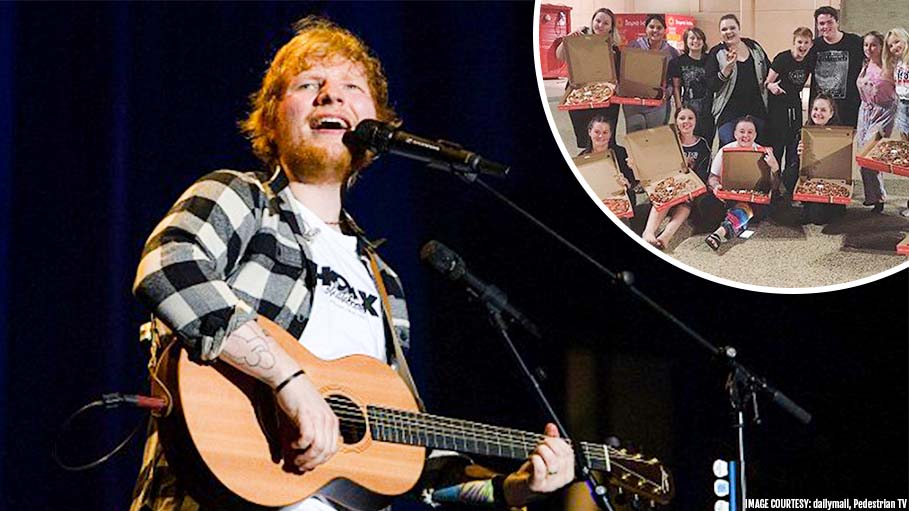 English singer Ed Sheeran performed in Adelaide, Australia on Wednesday. As usual, large crowds thronged to the scheduled place of performance  to have a glimpse of the star. Some crazy ‘Ed Sheeran’ fans who already had tickets wanted to get into the stadium first. They camped outside the Adelaide Oval, the previous night. They decided to spend the night on the concourse outside the gates. There were also some fans who were waiting to have a glimpse of  the singer for the past two days. As soon as the news of fans camping at the concourse, reached Ed Sheeran’s ears, the ‘Perfect’ singer made arrangements to send his loyal fans a load of pizza boxes late Tuesday night.

Fans quickly took to twitter to thank the kind singer. Below are some of the tweets.

@edsheeran @StuartCamp @frontiertouringEd, thank you so much for the pizza!!! We are beyond chuffed, thank you. Not a piece will go to waste.

Sheeran’s kind gestures didn’t stop at that. He also met up five year old Holley Sophie Lavington  from Adelaide, who is suffering from a rare terminal disease called ‘Batten disease’ that affects the nervous system. It is an inherent disorder that begins at childhood, can lead to seizures and an early death. Holley’s pathologist got connected to Ed Sheeran’s team and organized the meet.

Holley was glad to meet her favourite star. In fact, she became his fan even before she was diagnosed with this rare disease.

The family of the young girl wrote on facebook.

“Today Holley got to meet her favorite singer Ed Sheeran for a meet and greet, such a amazing experience for Holley. What a great humble guy x.”