The young woman was quite adamant and stood her ground till the bus finally moved gradually to the opposite lane. 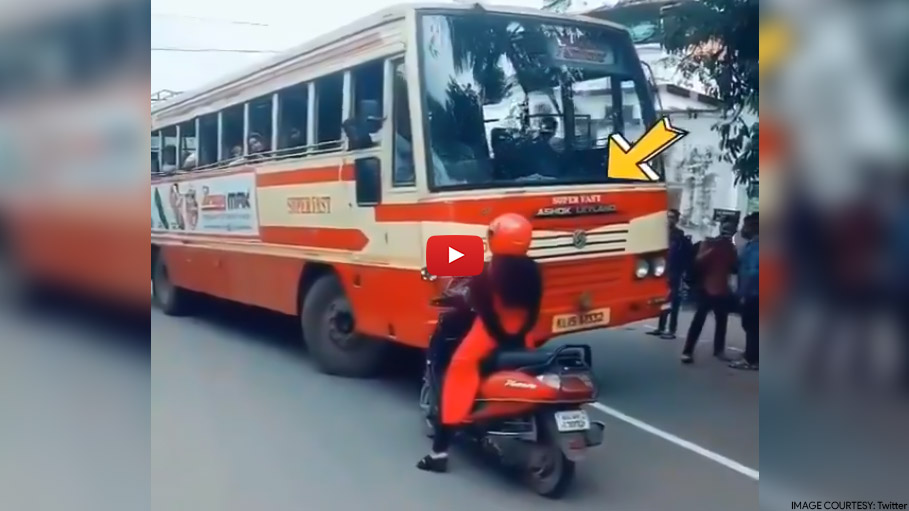 A video of a Keralite woman seated on her scooty in front of a bus on a busy road has gone viral.

The reason she was not moving and neither allowing the bus to move forward was because it had come onto the wrong lane.

The young woman was quite adamant and stood her ground till the bus finally moved gradually to the opposite lane. The video was shared by a person with twitter handle- @TheGhostRider31.

He captioned the video with these lines, “When you are RIGHT it gives you a very different kind of MIGHT. “

Take a look at the clip below:

When you are RIGHT it gives you a very different kind of MIGHT. See Joe a lady rider down South doesn't budge an inch to give in to an erring Bus Driver. Kudos to her. @TheBikerni @IndiaWima @UrvashiPatole @utterflea @anandmahindra @mishramugdha #GirlPower #BikerLife #BikerGirl pic.twitter.com/3RkkUr4XdG

It was a Kerala State Road Transport Corporation (KSRTC) which came from Kasaragod to Kottayam.

The video received 4,000 likes and was viewed more than 47,000 times. People applauded her bravery as it is not a common sight in India to witness a female driver take on a male driver more so on a busy road.

The young woman’s brave act would certainly influence other women to move, act and drive with ease and confidence on Indian roads.