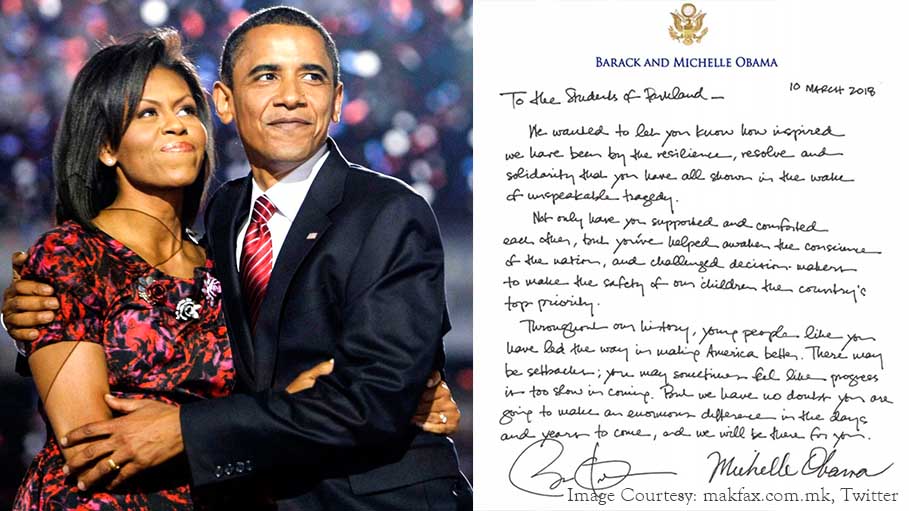 Former President- Barack  Obama and former First Lady- Michelle Obama recently sent a private letter to students who survived the Parkland mass shooting. The personal  letter that has now been made public indicates that even though the Obama’s are currently not in positions of power, yet they are able to meaningfully connect with the youth of the country.

The mass shooting that took place on 14 February at Marjory Stoneman Douglas High School in Parkland, instilled deep fear in the minds of citizens and more so in the psyche of the youth. The Obamas have understood the depth of the tragedy and have strongly empathized with the young survivors.  The private letter to the students is proof of that. The letter has now been made public.

Post the Parkland shooting, the Parkland students’ activism has seen a positive response. However, many of them have been victims of negativity  which they’ve endured positively. The Obamas have identified this and have encouraged them saying “There may be setbacks; you may sometimes feel like progress is too slow in coming," they advised. “But we have no doubt you are going to make an enormous difference in the days and years to come, and we will be there for you.”

These words are truly comforting for  young activists who have much work to do when it comes to gun reform laws. The letter motivates young minds to use the power of their voices and lead the way. There may be obstacles, however there will be change too. It’s a matter of perseverance, patience and determination.

Even though Donald Trump gave a thought-provoking speech, consoling and giving hope to the young survivors, it seems like the youngsters haven’t really been able to connect to the leader. The Obamas seem to be doing an efficient job when it comes to showing empathy and the private letter is living proof.

The Obamas have encouraged young activists to continue using their voice to make reforms. They are doing an amazing job, when it comes to comforting and connecting with the youth of the country, especially when they are growing up in a terrifying environment. The youth are bound to feel worthy and appreciated when their actions are noticed, praised and motivated by powerful leaders like the ‘Obamas.’ Obamas’ letter will help in ensuring that youngsters will be moulded into better role models for the country. This initiative will also be a minor step in preventing students from becoming violent who ultimately become responsible for mass shootings when they are not appreciated or heard.