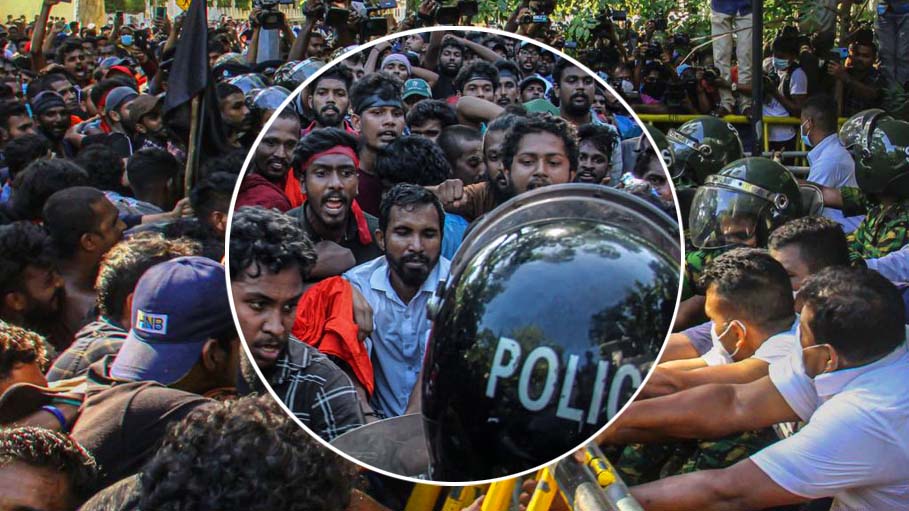 Months of lengthy blackouts, record inflation and acute food and fuel shortages have sparked increasing public discontent in Sri Lanka, which is dealing with its worst economic downturn since independence in 1948.

Sunday's protest saw student leaders scale the fence of Rajapaksa's compound in Colombo after police erected barricades on various roads around the capital to stop them from linking up with demonstrators elsewhere.

"You can block the road, but can't stop our struggle until the entire government goes home," one unidentified student leader said while standing on top of the walls.

Facing off against rows of police holding riot shields, protesters tried to pull down the barricades preventing them from entering the residence.

Some carried signs that said "Go Home Gota" -- the nickname for President Gotabaya Rajapaksa, who is Mahinda's younger brother -- while others wore the Guy Fawkes mask that have become synonymous with anti-establishment movements.

Police said Mahinda Rajapaksa, the head of Sri Lanka's ruling clan, was not on the premises at the time and the crowd left peacefully.

For more than two weeks, thousands of protesters have been camped daily outside the seafront office of President Gotabaya Rajapaksa, demanding for him and his brother to step down.

Nationwide demonstrations have seen crowds attempt to storm the homes and offices of government figures.

This week a man was shot dead when police fired on a road blockade in the central town of Rambukkana -- the first fatality since protests last month.

Sri Lanka's economic collapse began to be felt after the coronavirus pandemic torpedoed vital revenue from tourism and remittances.

The country is unable to finance essential imports, which has left rice, milk powder, sugar, wheat flour, and pharmaceuticals in short supply, while runaway inflation has worsened hardships.

Utilities unable to pay for fuel have imposed long daily blackouts to ration power, while long lines snake around service stations each morning as people queue for scant supplies of petrol and kerosene.

Finance minister Ali Sabry, who is in Washington to negotiate an International Monetary Fund bailout, warned Friday that the economic situation in Sri Lanka will likely deteriorate even further.