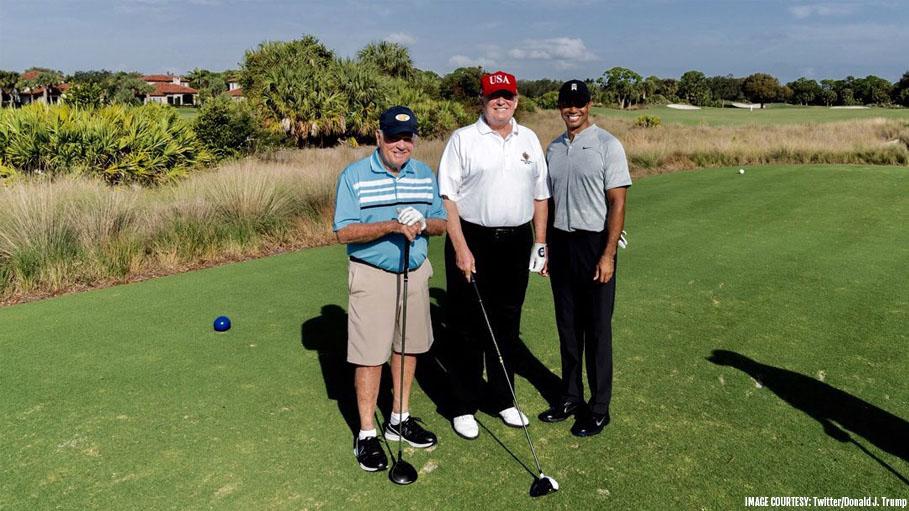 Earlier this month, US President Donald Trump has played a round of Golf with Tiger Woods and 18-time major champion Jack Nicklaus in Jupiter, Florida. Tiger Woods though shared his good experience playing with Trump but has declined to comment on the President’s game.

Tiger Woods said, "I’ve had a bit of an opportunity to play with a couple of presidents in a few weeks and enjoyed both days”, also remembering his match with former US President Barack Obama before the Farmers Insurance Open at Torrey Pines recently in the month of January.

Last week President Donald Trump joined Tiger Woods and Jack Nicklaus and played many rounds of golf together at Trump National Jupiter in Florida. After the match, President Trump tweeted a picture of himself along with the two golf legends on a green at the Trump National Golf Club.

On the eve of the US PGA Tour’s Genesis Open, when Tiger Woods was asked to analyze the game of the President, he didn’t go into details but said, “President Trump has been very busy up in DC, hasn’t played a lot of golf – hasn’t had the tan that (comes from) playing in the outside. He’s been working”.

Woods also added, “We just had a great time. I hadn’t played with Jack in a very long time. I played well that day, I shot 64 so I enjoyed the way I played. It was a great day to be able to play with our president and play with one of my idols that helped inspire me to play the game”.

The winner of 14 major championships though has avoided giving his opinion on Trump’s politics. Last August at the Northern Trust, when he was asked about Trump’s policies on immigration. Woods has said, “He is the President of the United States. You have to respect the office. No matter who is in the office, you may like, dislike personality or politics, but we all must respect the office”.

Tiger Woods also played with President Barrack Obama while he was in office and Presidents Bill Clinton and George H.W. Bush. He also shared a good rapport with Trump, as both of them knew each other for years, they even played together before the President took office. The President also joined Tiger Woods and Dustin Johnson in a round of golf in Jupiter last year. At that time, Johnson was ranked golf’s no. 1 in the world.

SEE ALSO:
From ‘John Wick’ to ‘Heropanti 2’, is Tiger Shroff the Next Keanu Reeves of Bollywood?

Is Tiger Shroff Making His Debut in Hollywood?