Scientists who are studying the wreckage say that despite conditions like intense freezing and pitch dark waters, life is thriving in the Titanic wreckage. 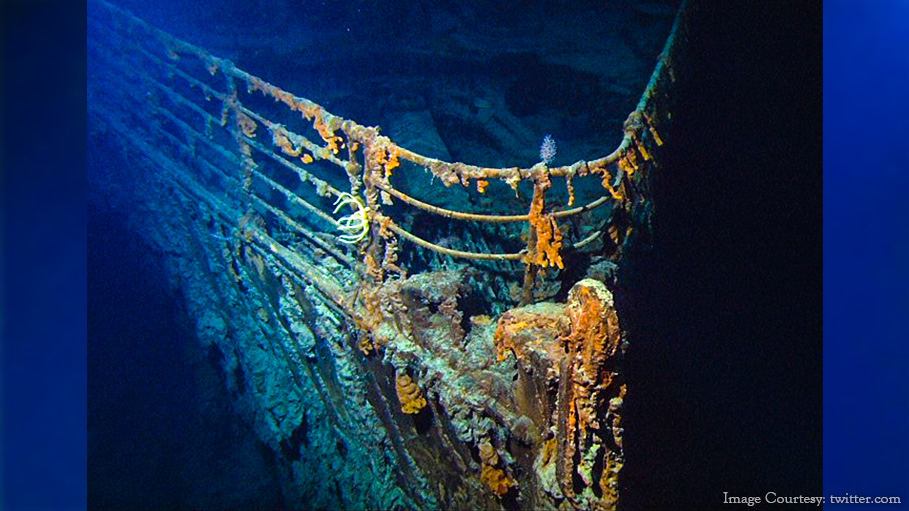 A team of divers dived into the deep waters of the Atlantic Ocean to explore the remaining wreckage of the iconic ship- ‘Titanic’. According to these highly trained divers, parts of the wreckage are in the same condition while there are other parts that are no more the same.

The part of the ship that was most eroded was seen on the starboard side of the officer’s quarters. The iconic Captain’s bathtub that is quite popular with Titanic followers is also “now gone.”

According to Titanic historian- Parks Stephenson the changes in the Titanic were “shocking.”

“That whole deck house on that side is collapsing, taking with it the state rooms. And that deterioration is going to continue advancing.”

According to Parks Stephenson, the sloping lounge of the bow section might also disappear soon. The fast erosion of the mighty iconic ship has been attributed to strong ocean currents, salt corrosion and bacteria that are eating into the metal.

In his own thought-provoking words, Stephenson said, “Titanic is returning to nature.”

Scientists who are studying the wreckage say that despite conditions like intense freezing and pitch dark waters, life is thriving in the Titanic wreckage. According to Clare Fitzsimmons, from Newcastle University, “There are microbes on the shipwreck that are eating away the iron of the wreck itself, creating 'rusticle' structures, which is a much weaker form of the metal.”

One can clearly notice the rusticle structures hanging from the wreckage and as per scientists, it is so fragile that it can crumble into dust.

It is important to capture ‘Titanic’ in its current form as it is uncertain how long the wreckage will remain, say scientists. The experts are also studying about the time period of this slow erosion that threatens to completely engulf the mighty royal ship. These dives are being filmed by Atlantic Productions for an upcoming documentary on the ship.

The British luxury ship- RMS Titanic was submerged in the deep mighty waters off the coast of Newfoundland in North Atlantic during its maiden voyage on April 15, 1912.  It started its voyage from South Hampton, England on April 10, 1912. The white star liner tragically collided with an iceberg and dived into deep waters of the Atlantic taking with it more than 1500 lives and more than 1500 stories of bravery and self-sacrifice.

If the wreckage diminishes as time passes by, it will be heart-breaking especially for all the ‘Titanic’ fans who are so fascinated by the mighty ship and the touching stories associated with it. The wreckage stands tall in all its glory and symbolizes an unforgettable event that has gone down the pages of history. The corroded structure reminds us of the thousands of brave men including women who had to sacrifice their own precious lives for the sake of others.

Robert Blyth from the National Maritime Museum rightly sums it up when he says, “The wreck itself is the only witness we've now got of the Titanic disaster.”

“All of the survivors have now passed away, so I think it's important to use the wreck whilst the wreck still has something to say.”