The tsunami, set off after an eruption of the Anak Krakatau volcano around the Sunda Strait, on late Saturday, has left hundreds of homes and other buildings badly damaged. 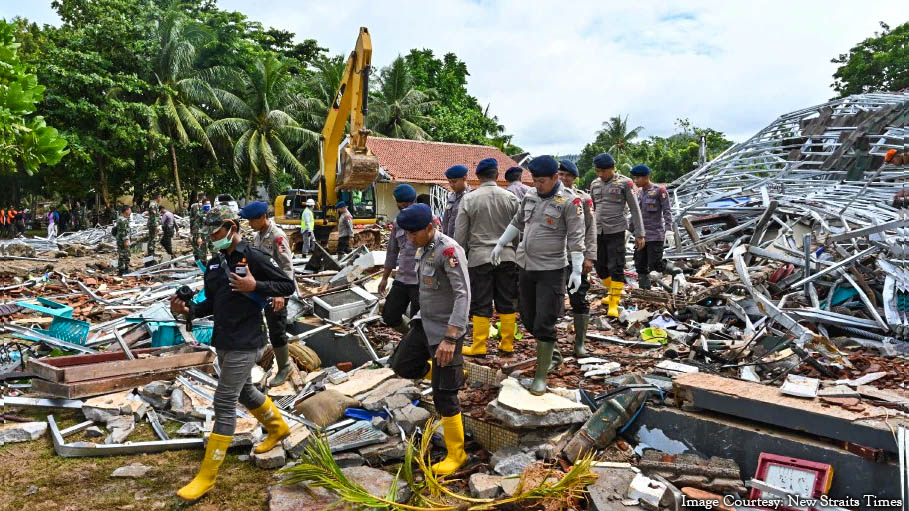 A tsunami struck Indonesia again without prior warning, killing more than 280 people, more than 28 missing and 1,000 injured. Immediately after the disaster, desperate search for survivors has begun.

The tsunami, set off after an eruption of the Anak Krakatau volcano around the Sunda Strait, on late Saturday, has left hundreds of homes and other buildings badly damaged. Thousands of residents were forced to evacuate to higher ground for safety. The National Disaster Agency alerted, “The number of victims and damage will continue to rise”.

Among the missing, two members of the band Seventeen, who were performing on the stage at a beach resort on the western tip of the Indonesian island of Java, when the tsunami hit. Video footage on the social media also shows the stage falling over the audience along with the band members and its equipment.

The band’s singer Reifian Fajarsyah said on social media that his wife and the band’s drummer were missing. He also paid tribute to the band’s bass player and road manager who were also killed in the disaster. Fajarsyah said, “The tide rose to the surface and dragged all the people on site. Unfortunately, when the current receded our members were unable to save themselves while some did not find a place to hold on”.

Indonesian President Joko Widodo expressed his grief and has ordered all the government agencies to focus on the disaster. He said, “my deep condolences to the victims in Banten and Lumpung provinces. Hopefully, those who are left have patience”.

A Tourist from Norway, Oystein Lund Andersen shared his dreaded experience, he was taking pictures of the volcano when the tsunami hit, he and his family fled to the safety, “I had to run, as the wave passed the beach and landed 15-20m (meters, or 50-65 feet) inland”, Andersen said.

The timing of the tsunami, which is three days before the Christmas brought back the memories of the tsunami on the Indian Ocean, which was triggered by an earthquake on December 26 in the year 2004. In the worst ever natural disaster, 226,000 people from 14 countries were killed.

The Anak Krakatau volcano lies in the Sunda Strait in between Java and Sumatra islands, linking the Indian Ocean and the Java Sea, which erupted about 24 minutes before the tsunami that hit Indonesia. The vast archipelago nation is one of the most disaster-prone nations on the Earth due to its position on the so called Pacific Ring of Fire, where tectonic plates collide.