Some followers on Twitter panicked after reading his suicide tweet. Seeing concerned fans posting a stream of messages on his message, he quickly deleted the messages. 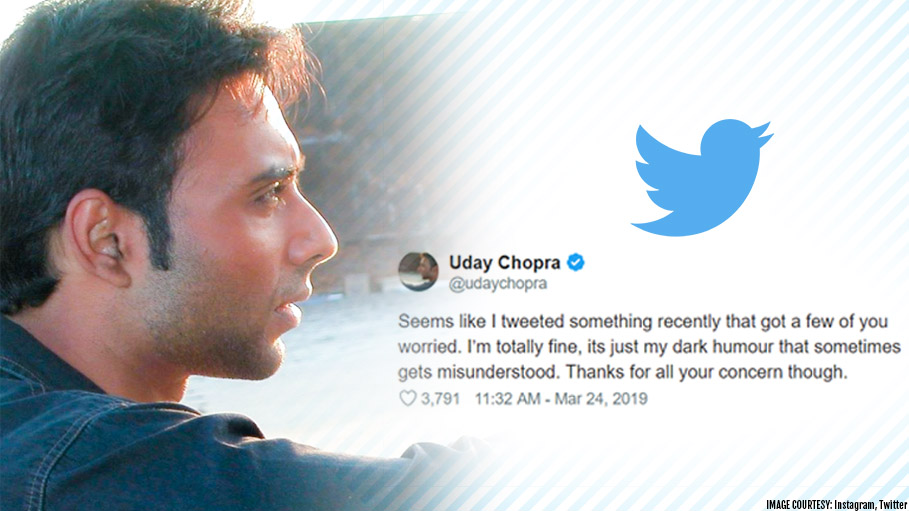 Uday Chopra got fans worried when he recently posted a distressing message on Twitter saying that he’s not “OK.” He first tweeted, “For a few hours I deactivated my Twitter account. It felt as close to death as I could get. Was phenomenal! I think this is a good option to suicide. I might be doing it permanently soon.” Again he tweeted, “Confession: I'm not okay. I am trying but so far I'm failing.”

Some followers on Twitter panicked after reading his suicide tweet. Seeing concerned fans posting a stream of messages on his message, he quickly deleted the messages. He later apologized by saying, “Seems like I tweeted something recently that got a few of you worried. I'm totally fine, it's just my dark humour that sometimes gets misunderstood. Thanks for all your concern though."

Though followers were relieved that he was safe, they were understandably angry at Uday’s online prank.

Uday Chopra’s online prank comes as a big surprise as he generally discusses relevant topics such as mental health, social media, atheism, social issues and so on. Nonetheless one has to acknowledge that Chopra’s tweets are witty, thought-provoking and aim to send a message. In one of his earlier tweets, he urged people to get help if they are suffering from mental health issues. He explained that you cannot “will it away”, “just shake it off” or “be strong.” You need to seek help and help is available. He also explained that one needs to look out for signs like over-indulgence in food, alcohol, social withdrawal etc. One shouldn’t judge but understand.

In another tweet, he discussed how people use social media today. He explained that the greatest threat social media is facing today is that people don’t say what they mean. They say what gets them most likes and attention. The aim is to become popular.

He has also discussed nutrition and diet in his posts. He revealed to his fans that he has been on a vegan diet for the past 50 days and it has worked wonderfully for him. He further urged people to go on a plant-based diet or at least try one plant-based meal a day.

Below are some of Uday’s witty tweets:

The actor may have miscalculated when he posted the distressing message recently, albeit one can’t deny that Uday has mastered the art of tweeting. He also has a way of handling trolls like no other.

When one follower posted a question, “Uday bhai, are u working on any films right now?” he responded with “Yes. It’s called ‘No film’” directed by “No one will cast me” produced by the famous “I’m not an actor.” This goes to prove that the actor is not only witty but has learnt the art handling trollers tactfully without hurting sentiments.

The actor who appeared in movies like ‘Neal 'n' Nikki’ and ‘Dhoom 3’ quit acting years ago as his movies were poorly received. He was quoted by IANS saying, “That's over. My focus is not there. Also, I don't have time to act.” He’s turned to producing and directing and currently runs Yash Raj Films' subsidiary YRF Entertainment. One of his movies recent movies were nominated at the Emmy Awards.