With the ascent of young Prince Mohammad bin Salman, Saudi Arabia has seen an expansion in terms of broader thoughts and actions mainly in matters concerning women's rights. 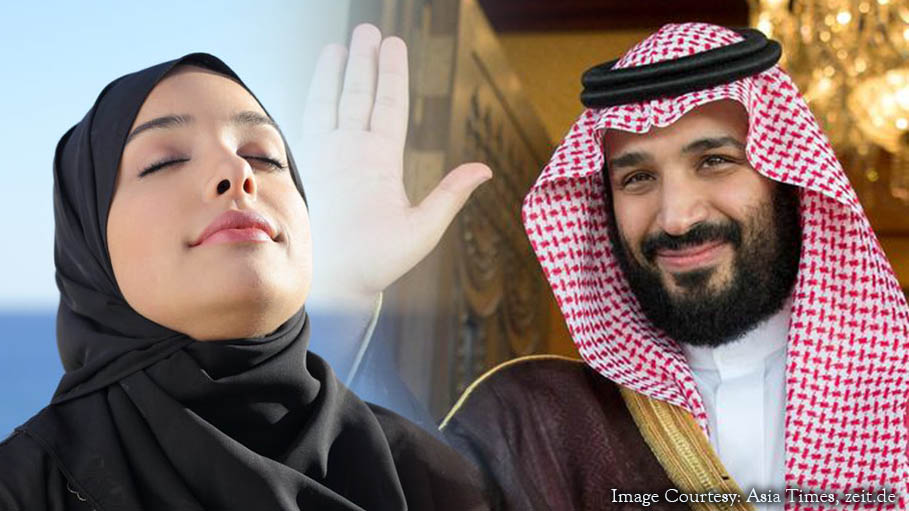 With the ascent of young Prince Mohammad bin Salman, Saudi Arabia has seen an expansion in terms of broader thoughts and actions mainly in matters concerning women's rights, which also includes a decision to allow women to attend mixed public sporting events and the right to drive cars from this summer. Now he has said, Women in Saudi Arabia need not have to wear head cover or the black abaya, the loose-fitting full-length robes as long as their attire is “decent and respectful”.

The changes and thoughts by Prince Salman have been hailed as a proof of a new progressive trend towards modernisation in the deeply conservative Muslim kingdom, although the gender isolated nation continues to be the subject of criticism because of its continued constraints on women.

“The laws are very clear and stipulated in the laws of sharia (Islamic law), that women wear decent, respectful clothing, like men,” Prince Mohammed said in an interview recently. The kingdom's reform minded crown prince also said, “this, however, does not particularly specify a black abaya or a black head cover. The decision is entirely left for women to decide what type of decent and respectful attire she chooses to wear.”

Saudi Arabia has no written legal code in the form of constitution or law, so it goes with the text written or inscribed in the sharia and police and judiciary have enforced a strict dress code requiring Saudi women to wear abayas for long. But the kingdom has witnessed a cautious new climate of social freedoms with the rise of the 32-year-old crown prince to power after decades of elderly rulers.

When asked whether men and women were equal, the crown prince said, “we are all human beings and there is no difference”. Salman also said that his government was working on an initiative to introduce equal pay for men and women, which will be introduced very soon in Saudi Arabia.

A top Saudi cleric had also expressed similar views in February. “More than 90% of pious Muslim women in the Muslim world do not wear abayas,” Sheikh Abdullah al-Mutlaq, a member of the council of senior scholars, had said this during a radio program.

Crown Prince Mohammad bin Salman claimed that the 1979 Iranian Revolution had made Saudi Arabians victims of intolerance and that the Ayatollah Khomeini regime had established a theocracy in Tehran. He also denied that the Saudi Arabia of today is the real Saudi Arabia, a progressive and broad society. “We were living a very normal life like the rest of the Gulf countries,” Salman said. “Women were driving cars. There were movie theaters in Saudi Arabia. Women worked everywhere. We were just normal people developing like any other country in the world until the events of 1979.”

The crown prince added that extremists, conservatives and religious fundamentalist in Saudi Arabia had forbidden men and women from interacting which he said contradicted the way of life practiced during the time of Prophet Mohammad and the caliphs. The crown prince had also said that Saudi Arabia would develop a nuclear weapon if Iran did so.

In recent time, Saudi Arabia has witnessed a series of reforms. In September 2017, it has announced that women will be allowed to drive from June 2018 for the first time in the kingdom. In January, the country allowed women to enter sports stadiums, and late in February, Saudi Arabia allowed women to join the military. The country held a marathon for women in the first week of March.

On March 8, a group of women in the Saudi city of Jeddah marked International Women’s Day by exercising one of their newly acquired freedoms, the right to go for a jog, paying no heed to bemused onlookers.

However, activists have blasted the country’s continued guardianship system requiring a male family member to grant permission for a woman to study abroad, travel and other activities.

A few weeks ago a United Nations civil and social rights watchdog has called on Saudi Arabia to end discriminatory practices against women including male guardianship and give them full access to justice.