After the success of Jug Jugg Jeeyo, Varun Dhawan is all prepared for his upcoming film Bhediya. The actor, who shares the screen with Kriti Sanon this time, reached Kolkata earlier today to promote the film with the actress. 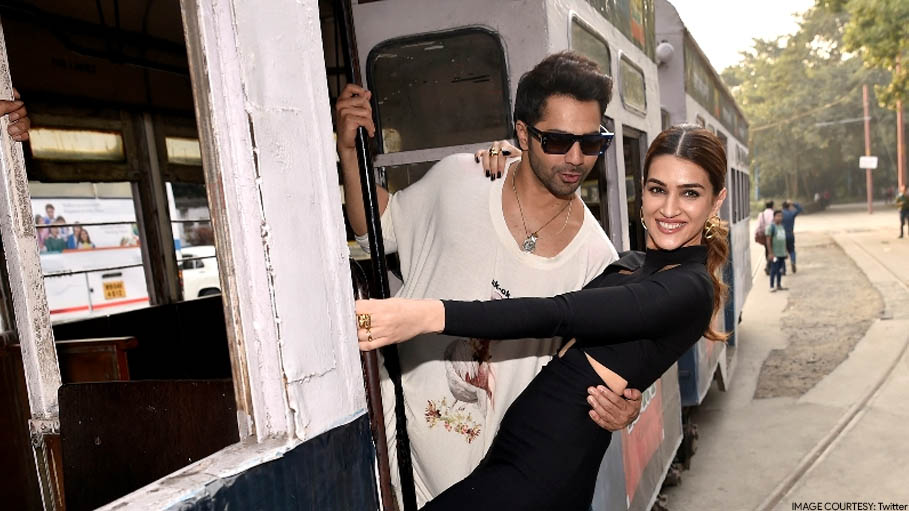 After the success of JugJugg Jeeyo, Varun Dhawan is all prepared for his upcoming film Bhediya to hit screens on November 25, 2022. The actor shares the screen with Kriti Sanon this time. They reached Kolkata e to promote the film with the director and other crews.

The lead stars put their best fashion foot forward but it was not their stunning looks that made it news. It was their energetic promotional activity that went instantly viral.

In a video that is now doing rounds on the internet, Varun can be seen greeting his fans in the city. The actor, as soon as he reached the location, managed to shut down the entire street and you can hear his fans whistle and cheer his name in the video. You also see Kriti in the video just embracing the moment.

Prominent Bengali actor Prosenjit Chatterjee was also present at the promotions and he shared the stage with the Bhediya cast members.

Bhediya tells the story of Bhaskar (Varun), a man who slowly begins to transform into a wolf after being bitten by the mythical creature.

Director Amar Kaushik said, “The moment we set foot in this city, people have been trying to uncover details about Bhediya and know more about the film.”

Bhaskar gets bitten by a wolf at a very special yet magical night that happens once in a year, Due to that bite he gets the abilities and characteristics of the wolf therefore turning him into a werewolf at full moon nights.

The producer of the film, Dinesh Vijan, confirmed that Bhediya is part of his horror comedy universe consisting of films like Stree, Roohi and Munjha. Munjha will be the Prequel to 2018 film Stree.

The shooting for Bhediya is done in the regions of Arunachal Pradesh - Ziro (Lower Subansiri), Sagalee (Papum Pare) and parts of Pakke-Kessang district- over a span of two months, from March to April 2021. Over 70 percent of the artists in Bhediya are from Arunachal Pradesh, including a lead character, named Jomin. Besides that, Arunachal rapper K4 Kheko will also feature in the film. He has also sung and written the lyrics for the theme song of the film.

Varun Dhawan and Natasha Dalal are Officially Man and Wife