Three years ago she had a kidney transplant and of late she had not been keeping well. Due to health reasons, she had not even contested in the recently held Lok Sabha election and opted out of the Prime Minister Narendra Modi’s new government. 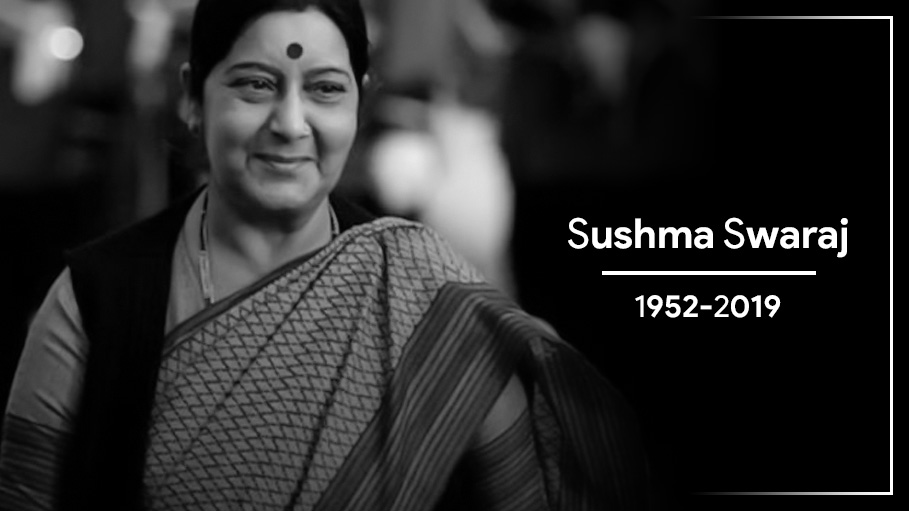 One of BJP’s most beloved leader and former Foreign Minister of India, Sushma Swaraj passed away on Tuesday evening after a cardiac arrest at the age of 67 years. Her death shocked the entire nation where millions adored her for her prompt response to any distress calls made on Twitter by Indians in any corner of the world and her exceptional thought-provoking oratory.

Yesterday night around 9 pm her family rushed her to Delhi’s All India Institute of Medical Sciences when she complained of uneasiness. A number of her party colleagues and ministers followed and reached the hospital. Among the first to arrive were Nitin Gadkari, Dr Harshvardhan, Rajnath Singh and Smriti Irani.

Three years ago she had a kidney transplant and of late she had not been keeping well. Due to health reasons, she had not even contested in the recently held Lok Sabha election and opted out of the Prime Minister Narendra Modi’s new government. But she has been active online and encouraging the party and the government as and when it was required.

Even hours before her death, she had tweeted congratulating Prime Minister Narendra Modi for the swift passage of the Jammu and Kashmir Reorganization bill in both the houses of the parliament.

Her last tweet, @narendramodiji – Thank you Prime Minister. Thank you very much. I was waiting to see this day in my lifetime.

Prime Minister Narendra Modi tweeted, “A glorious chapter in the Indian politics has come to an end. India grieves the demise of the remarkable leader who devoted her life in public service and in bettering lives of the poor. Sushma Swaraj Ji was one of her kind, she was a source of inspiration for crores of people”.

Prime Minister also added, “Sushma Ji was a prolific orator and an outstanding Parliamentarian. She was admired and revered across the party lines”.

As the foreign minister of the country, Sushma Swaraj’s interventions ranged from seeking information on relatives stranded in emergency situations in other countries to families who needed help in bringing home a relatives dead body from abroad and even helping foreign nationals seeking urgent medical visa for treatment in India. She can be reached anytime through a tweet.

Her kindness, warmth and mellow humour had touched many across the party line. But she never compromised when it came to the matters of ideology and interests of the BJP.

Congress leader Rahul Gandhi mourned her passing away, “I’m shocked to hear about the demise of Sushma Swaraj Ji, an extraordinary political leader, a gifted orator & an exceptional Parliamentarian, with friendships across party lines. My condolences to her family in this hour of grief. May her soul rest in peace. Om Shanti”.

Sushma Swaraj was a 9-time parliamentarian, a wonderful orator and a gifted administrator. Back in 1977, Sushma Swaraj became the youngest minister of Haryana. A former lawyer of Supreme Court, she started her political career with Akhil Bharatiya Vidyarthi Parishad, BJP’s student wing in the 1970s. After the death of senior party leader Pramod Mahajan in the year 2006, Swaraj emerged as the most prominent face among the next generation leaders of the BJP.

She grew in stature in the BJP, when she was chosen Leader of the Opposition in the Lok Sabha in 2009. Before joining the cabinet rank holding important office such as Foreign Ministry, Sushma Swaraj has been the chief minister of Delhi. She also held important portfolios such as information and broadcasting and health in the NDA government under the leadership of Atal Bihari Vajpayee.