After handling the wild beast for a quite a while, the wild animal is seen over-powering the trainer. To people’s amazement, Hamada Kouta falls to the ground and people in the audience are heard screaming in the video. 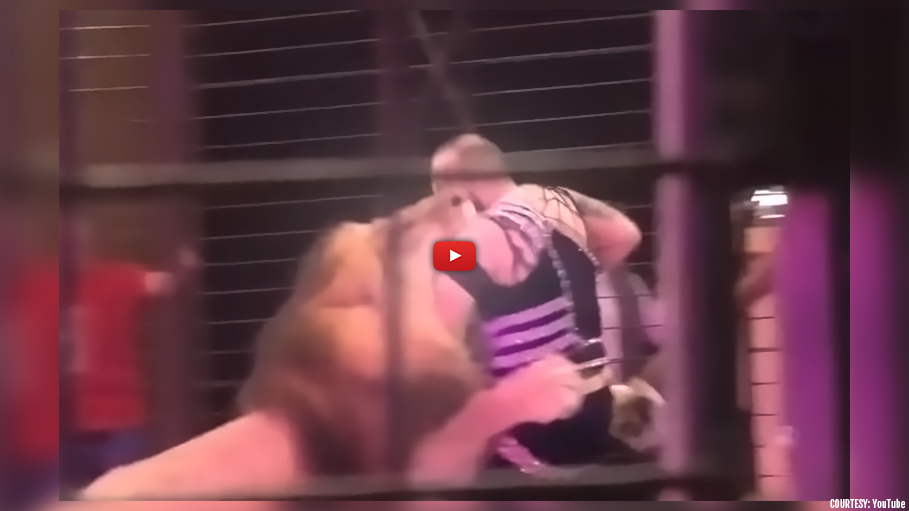 A terrifying video of a lion attacking his trainer in a Ukraine circus has gone viral. In the Lugansk State Circus, the trainer Hamada Kouta is seen struggling to handle the lion for quite a while with music playing in the background.

In the video, other lions can be seen standing nearby. Fortunately, they were not provoked and remained calm.

After handling the wild beast for a quite a while, the wild animal is seen over-powering the trainer. To people’s amazement, Hamada Kouta falls to the ground and people in the audience are heard screaming in the video.

Below is the graphic video.

The trainer managed to push the lion away and the animal thankfully moved back. Hamada Kouta escaped with minor injuries though he was covered with blood.

Speaking of the terrifying incident, the trainer said, “The lion jumped at me and bit me - but thank God not on my neck. He immediately let me go. My back, arm and leg were hurt. He added, “I called up one lion, and the second one attacked me from the front.”

The brave trainer asked everyone to calm down and worked on the performance all over again. After this incident organizations like Big Cat Rescue and Animal Defenders International are demanding a ban of wild cats in circuses.

Animals attacking their own trainers and the public are a common scenario according to the President of Animal Defenders International- Jan Creamer. Reason being, some of the animals are already under a lot of stress as they are kept under unsuitable conditions like small spaces where their movement is restricted.

Some of them may be neglected or even abused in the hands of their masters who often use electric prods, metal bars and whips. One needs to realise that even before they come on stage, they’ve already undergone a lot of stress which becomes a strong ground for attacks.

Hundreds of attacks and escapes have been reported till date and the only way to protect the animal handlers and public from these terrifying acts is to ban wild animal acts in circuses says the President of ADI.

SEE ALSO:
Lionel Messi Confirms He Will Stay with Barcelona for Upcoming Season