A Tibet Airlines plane caught fire Thursday after veering off the runway at a Chinese airport, but all passengers and crew were "safely evacuated", the airline said. 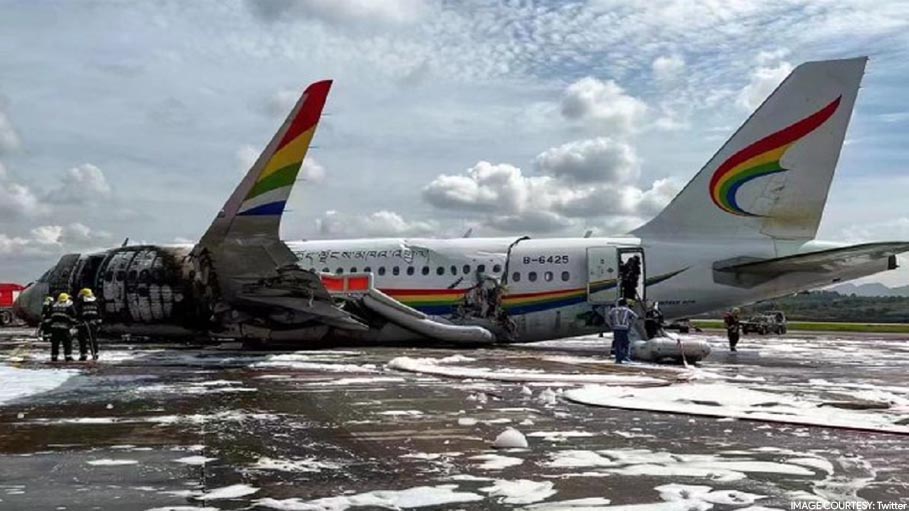 Chongqing: A Tibet Airlines plane caught fire Thursday after veering off the runway at a Chinese airport, but all passengers and crew were "safely evacuated", the airline said.

The flight, carrying 113 passengers and nine crew, was headed from the southwestern city of Chongqing to Tibet's Nyingchi when "abnormalities" were noticed and take-off was suspended, causing the jet to overrun the runway, the company said in a statement.

Images shared by Chinese state media showed flames engulfing the side of the stricken jet as terrified passengers ran from the scene.

Photos of the aftermath showed scorch marks covering the nose and one wing of the jet, which had been doused in water to control the blaze.

"All passengers and crew have been safely evacuated," Tibet Airlines said in a statement.

"The injured passengers were all only lightly injured, and have been sent to hospital for treatment."

Flight TV9833 deviated from the runway during take-off and "the left side of the aircraft's nose caught fire", Chongqing Jiangbei International Airport said in a separate statement.

About 40 passengers with minor injuries were sent to hospital, the airport added.

According to reports, at about 8:00 on May 12, a Tibet Airlines flight deviates from the runway and caught fire when it took off at Chongqing Jiangbei International Airport.#chongqing #airplane crash #fire pic.twitter.com/re3OeavOTA

Operations at Chongqing Jiangbei International Airport have since returned to normal. "The cause of the accident is being investigated," the airport said.

The incident comes after a China Eastern flight travelling from Kunming to Guangzhou plunged from 29,000 feet into a mountainside in March, killing all 132 people on board.

No reason for that crash, China's deadliest in around 30 years, has yet been given.

Two flight recorders, or "black boxes", were recovered and are being analysed in the United States in the hopes of unlocking the mystery behind the China Eastern jet's rapid descent.

In the immediate aftermath of the crash, China's ruling Communist Party moved quickly to control information, revving up its censorship machine as media outlets and residents raced to the crash site.

There was no report of issues before the flight nor was there cargo declared as dangerous on the plane, according to authorities, who noted no abnormalities in the plane's navigation and monitoring equipment.

‘Jhalak Dikhla Jaa Reloaded’: Emraan Hashmi Back on This Playboy Track from the ‘The Body’