Us President Donald Trump wishes for peace and God's Blessings. 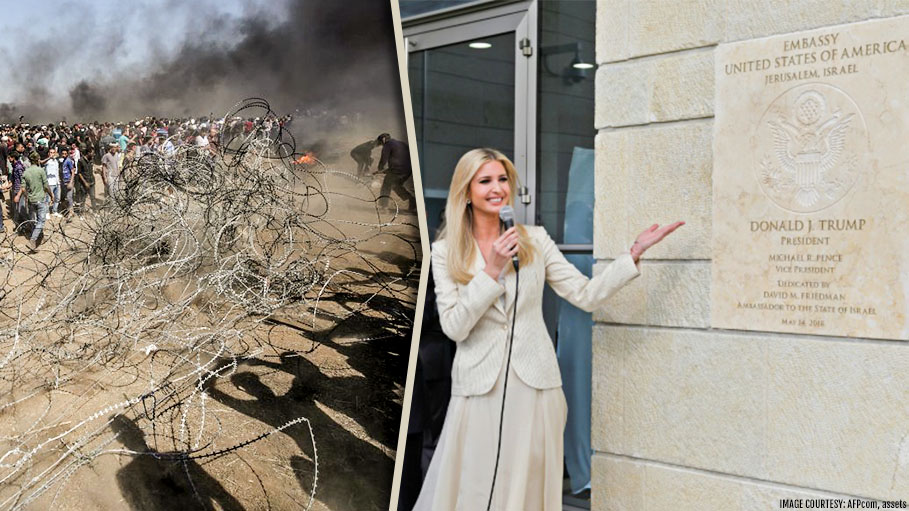 Ivanka Trump was recently condemned over a series of photos taken during the opening ceremony of the US Embassy in Jerusalem that shows her smiling. It was the same day 60 Palestinians were shot near the borders.

Ivanka Trump along with her husband- Jared Kushner was invited to Jerusalem for the opening of the new US Embassy. The relocation of the US Embassy from Tel Aviv to Jerusalem enraged Palestinians as they assumed that the US is siding with Israel. It is because both Palestinians and Israel claim Jerusalem as their capital and this ancient territorial dispute has been ongoing since years.

Besides the Trumps, US Treasury Secretary- Steven Mnuchin and Deputy Secretary of State- John Sullivan were at the ceremony. While this group were celebrating the opening of the embassy by taking selfies with Israeli Prime Minister Benjamin Netanyahu and his wife Sara, the Israeli army had opened fire on Palestinian protesters on the Gaza border. The protestors were objecting to the relocation of the embassy to Jerusalem.

Though Ivanka Trump was unaware of the clashes at that time, She came under the public scanner and bore the brunt of media and public’s anger. Ivanka Trump was criticized for her lack of awareness and many even questioned her and Kushner’s presence in the ceremony as they are seen as senior advisers to the President and not as official US Diplomats. The cover of the New York Daily News newspaper described her as “Daddy’s little ghoul” and accused her of smiling while hundreds were losing their lives at the border.

Chaos in the border

A videotaped statement by Donald Trump was played during the US Embassy opening ceremony. The president said the United States "remains fully committed to facilitating a lasting peace agreement" between Israelis and Palestinians. "We extend a hand in friendship to Israel, the Palestinians, and to all of their neighbors." "May there be peace," Trump said. "May God bless this embassy."

Around the same time, Palestinians were rushing to the border in huge numbers protesting the ceremony. The Israeli forces first used tear gas to stop the protest which eventually led to killings. As per reports, more than 50 people including eight children lost their lives in the clashes. The Palestinian ambassador to the United Nations strongly condemned these attacks. “We condemn this action in the strongest possible terms," Mansour said. "We demand that this action be stopped immediately, and we want those responsible to be brought to justice from the Israeli side because this is not allowed under the provisions of international law."

Israeli military’s international spokesman- Lt. Cl. Jonathan Conricus however had a different version to the story. He admitted that Israelis failed to minimize the casualties, however, Hamas won the PR war by a “Knockout". He stated “Hamas wanted the casualties. Hamas wanted people to die. Hamas wanted the pictures of the wounded and the overflowing hospitals ... and they had no problems sending the human shields forward. That is the sad reality of what we have been facing,” he said.

He explained that in a violent situation where there is tear gas, smoke from tires, rioters tearing down the fence and throwing grenades and rocks and Molotov cocktails, the military couldn’t take chances. They couldn’t take the risk of allowing the protestors to break the fence as kibbutzim and other Israeli communities stay within just hundred meters of the border. When it comes to saving the Israeli communities and the Israeli border, there’s no dilemma.