The floating power station has to be refueled every three years, which saves up to 200,000 metric tons of coal and 100,000 tons of fuel oil a year. The reactors are supposed to have a lifespan of 40 years. 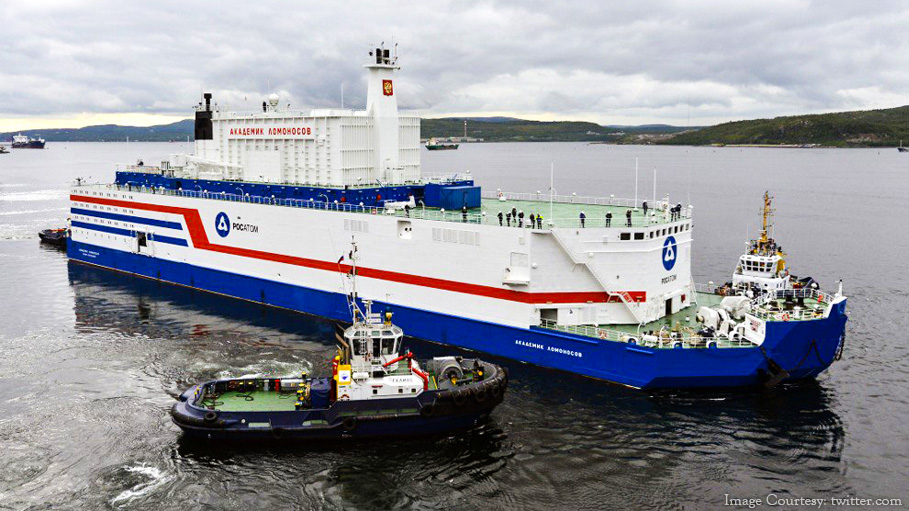 World’s first Russian built floating nuclear power station Akademik Lomonosov has completed a 5,000-kilometre (3,100-mile) Arctic transfer and has now arrived at its base in the country’s far east.

Ministry for Atomic Energy of the Russian Federation, also known as Rosatom said, “The Akademik Lomonosov floating nuclear plant arrived at Pevek, in the autonomous district of Chukotka”. It is here, from where it will start its operation by the end of the year once it is connected to the local electricity grid.

The floating nuclear plant left Murmansk located in Russia’s far north on August 23 after being loaded with combustible nuclear fuel. The 21-ton, 144-metre long and 30-metre wide plant, which houses two 35-megawatt reactors and are built more in line with the power of the nuclear-powered icebreakers is now back to its base after nearly a month of travel and experiments.

The Akademik Lomonosov is designed to meet the energy needs of remote communities and is built to provide energy to around 100,000 people and also power oil platforms.

Alexei Likhachev, the head of Rosatom said in a statement, “It is perhaps a small step towards sustainable development in the Arctic but it is a giant step towards decarbonisation of remote, off-grid zones and a turning point in the global development of small modular nuclear plants”.

Many environmental groups including Greenpeace, however, have criticised the project saying it will have serious consequences for a fragile ecosystem in case of any type of accidents and storms.

Greenpeace also named the project as ‘Nuclear Titanic’ and ‘Chernobyl on ice’ as the environmental fears were also increased after an explosion at a nuclear research facility in Russia’s far north in August this year, that also witnessed the local radiation levels briefly spike.

The project for the floating power station began in 2000 when Rosatam chose Severodvinsk in Arkhangelsk Oblast as the construction site. However, in August 2008 construction works were transferred to the Baltic Shipyard in Saint Petersburg, which is also responsible for the construction of future vessels.

On 1 July 2010, Akademik Lomonosov was officially launched, built at a cost of 6 billion rubles (232 million dollar). The floating power station is not a self-propelled vessel and has a displacement of 21,500 tonnes and can travel with 69 crew members.

The floating power station has to be refueled every three years, which saves up to 200,000 metric tons of coal and 100,000 tons of fuel oil a year. The reactors are supposed to have a lifespan of 40 years.

The manufacturer has also arranged for the disposal of nuclear waste and maintenance is provided by the infrastructure of the Russian nuclear industry. Thus, virtually no radiation is expected at the place where the power station is going to produce energy.

Russia with over 50 years of experience operating a fleet of nuclear-powered icebreakers are also used for scientific and Arctic tourism expeditions. In 2015, Russia’s state nuclear corporation Rosatom has also announced the construction of its second vessel, which will resume its work by the end of this year.