Next time if you plan to travel across the world by sea, then the world’s largest cruise-liner, Symphony of the Seas, is waiting for you, but it’s little expensive, so be prepared. 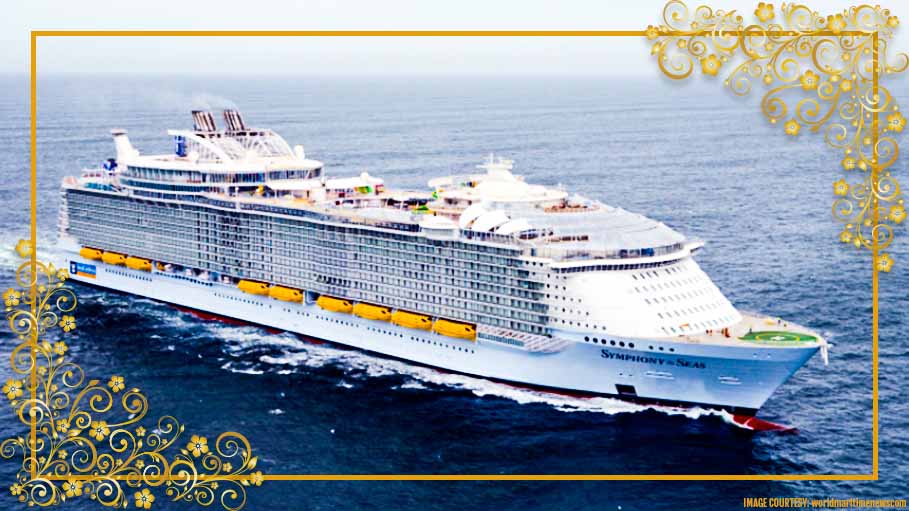 Next time if you plan to travel across the world by sea, then the world’s largest cruise-liner, Symphony of the Seas, is waiting for you, but it’s little expensive, so be prepared. The ship has already left the shipyard of Saint-Nazaire in France to finally set on its maiden voyage in the Mediterranean from Barcelona, Spain on March 31.

The much talked about Symphony of the Seas is no doubt known, for being the largest cruise ship. Apart from this, the ship is the latest example of innovation and technically advanced cruise ships. The Royal Caribbean’s cruise ship weighs 228,000 tons, which is 362 meters long and has the capacity of holding nearly 8000 guests with 2,759 staterooms in total along with another 28 balcony rooms. “Symphony of the Seas is the latest example of how our people work to push the envelope of innovation with each new ship,” the Royal Caribbean Cruises Ltd. Chairman and CEO Richard D. Fain said.

It took five years to build the Symphony, Shipbuilders STX France began construction in September 2013 and for months tourists have been allowed on board to see inside.

The Symphony of the Seas also holds in it an ice rink, water park and full-size basketball court along with 2,700 cabins. The ship with nearly 8,000 people on board capacity including 2,200 staff is billed as faster and quieter than the Harmony.

There is also a luxury family suite for the family who doesn’t like to share and maintain their privacy. The special suite also includes a two-storey slide, private movie theatre and Lego wall. But the eight-person luxury family room is costly as the charges for the rooms are some tens of thousands of dollars.

The ship also has a laser tagged arena, a Bionic Bar, where robots as waiter will make and serve drinks, a rock climbing and a ice skating area. The ship will also host a production of the Broadway hit “Hairspray” and its sports bar will feature on 30 big-screen TVs. The Broadway band’s mega hit “Hairspray” will be performed aboard the ship as part of the live entertainment. The ship ensures non-stop amusement and entertainment for the passengers.

The Symphony is the 13th ship that STX France has built for Royal Caribbean and comes as the French manufacturer. It has also orders of building two ships by 2020. STX, which has a staff of 8,000 and also builds warships, is also building the Celebrity Edge, the first of a series of smaller and more luxurious liners for Royal Caribbean.

Three pilots, helped the captain with the tricky manoeuvre needed to guide the hulking ship out of the Saint-Nazaire estuary while thousands of people gathered at the dock to watch. More than 500 people, mostly crew as well as officials from the owners and engineers and suppliers, worked to make the impossible possible.

The first destination of Symphony after it starts from Spain. It will first head to Malaga and there it will spend the first season in the Mediterranean and then it’ll head towards its home-port of Miami in November this year.

The ship is also going to be the centerpiece of a new terminal of that first broke ground last year and will be what the company is calling the most innovative cruise facility in the United States of America.

Now, the Symphony of the Seas will operate seven-night eastern and western Caribbean cruises with entertainer on board. Apart from this the tour package will also include Perfect Day destination in the Bahamas. So next time you plan your world tour keep Symphony in mind.