The Forbes Magazine’s real-time ranking of the world’s billionaires placed Xu Jiayin at number 20, which is one spot ahead of Jack Ma and two step ahead of Pony Ma Huateng. 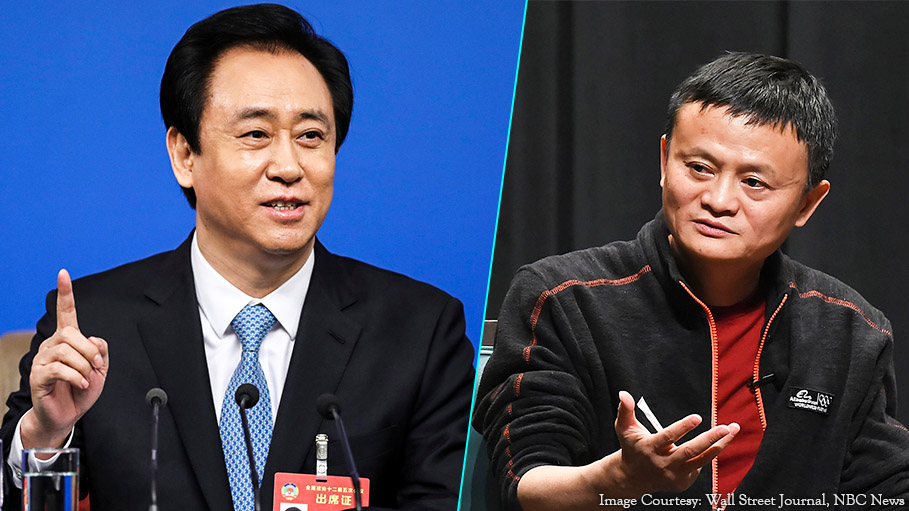 Xu Jiayin, who is the owner of a real estate company, has become the richest man in China with a wealth of $36.7 billion net worth, overtaking Alibaba founder Jack Ma. Evergrande Group’s owner Xu Jiayin's fortune put him ahead of Jack Ma ($35.4 billion) and Tencent founder Pony Ma Huateng ($35.3 billion).

The Forbes Magazine’s real-time ranking of the world’s billionaires placed Xu Jiayin at number 20, which is one spot ahead of Jack Ma and two step ahead of Pony Ma Huateng.

Real estate titan Xu Jiayin was also named the richest person in China in the year 2017 by Forbes, but in the following year his wealth declined but by the end of the year again the increase in the value of Evergrande’s shares has repositioned Xu Jiayin at the top of China’s rich list as its stocks continued to rise over the past month.

The list also has seen for the first time Chinese woman entrepreneur on the list. The first woman to make it to the list is a property developer and major shareholder of Country Garden Holdings, Yang Huiyan, who is in the sixth position with an estimated wealth of about $18.2 billion.

China’s youngest billionaire is 34-year-old Zhang Yiming, who is the founder of Byte Dance, a technological company that has developed popular apps such as Douyin, which is known in the international market as TikTok also made it to the list with an estimated wealth of about $6.8 billion.

Though Jack Ma has not been able to make it to the top, he is a fighter and inspiration, who has steered Alibaba into a new era of technology after he founded the company in a small apartment and grew it into a 420 billion dollar company making it one of the leading tech companies of the world.

Jack Ma was born in a poor family in 1964 in the eastern city of Hangzhou in China. After finishing his schooling, he applied for college. It took more years to pass his college examination as he failed twice for his bad marks in Mathematics.

Though his ill luck followed even after he graduated, when he applied for jobs, he was rejected several times. Later, he fetched odd jobs, like for a short period he worked at KFC, in a security firm and as a waiter at a local restaurant.

In the year 1995, Jack Ma visited the United States, which has changed his life forever. It was in the US he was first introduced to the Internet and when he comes back to China he launched his first venture, China pages borrowing small money. China Pages was his first business venture which is also the first commercial website of China.

Later with the help of 17 of his core friends, he launched Alibaba.com a platform for Chinese exporters, manufacturers and entrepreneurs to list and sell their items worldwide. The venture clicked as it attracted and raised huge profits within months of its inception and rest is the history. Ma conceived the name Alibaba from the famous story of “Ali Baba and the 40 thieves”.