"My Second Life": Veteran US Nurse Walks Out of Hospital After 8-Month Covid Ordeal

As a veteran ICU nurse whose job is to care for the most critically ill patients at her hospital in Long Beach, California, Merlin Pambuan was well aware of the deadly ravages COVID-19 can inflict on the human body. 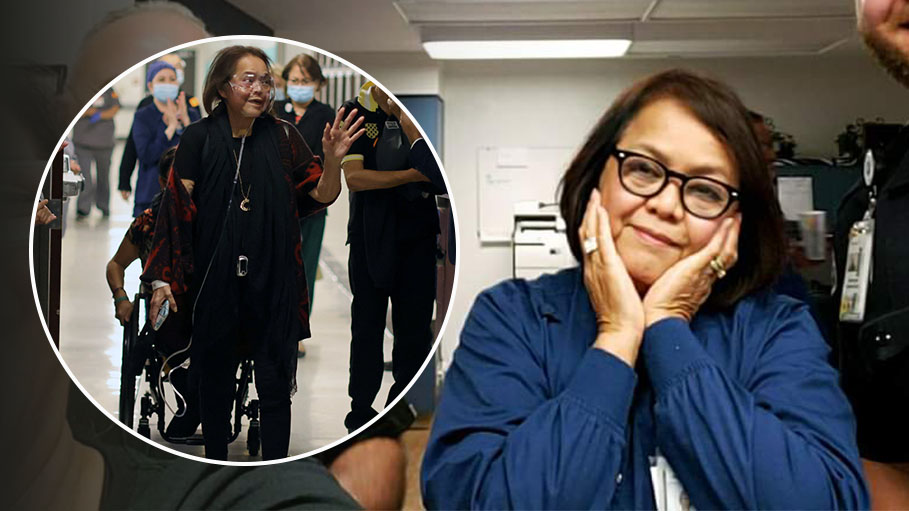 Long Beach, Calif.: As a veteran ICU nurse whose job is to care for the most critically ill patients at her hospital in Long Beach, California, Merlin Pambuan was well aware of the deadly ravages COVID-19 can inflict on the human body.

Last spring in a tragic role reversal, Pambuan became one of those patients - admitted to the intensive care unit of St. Mary Medical Center, her workplace for the past 40 years, where she was rendered unconscious by paralysis-inducing sedation and placed on a ventilator to breathe. A feeding tube was later added.

She came close to death on several occasions, her doctors later revealed. So dire was her condition at one point that end-of-life options were discussed with her family.

By the time she awoke and could breathe on her own again, she was too weak to stand. But she fought back and struggled through weeks of painful therapy to regain her strength and mobility, celebrating her 66th birthday in St. Mary's acute rehabilitation ward in late October.

On Monday Pambuan beat the odds of her eight-month ordeal by walking out the front door of the hospital, drawing cheers, applause and exhilaration from colleagues lining the lobby to rejoice in her discharge.

"This is my second life," Pambuan said moments earlier, as she prepared to leave her hospital room, accompanied by her husband, Daniel, 63, and their daughter, Shantell, 33, an aspiring social worker who spent months at her mother's bedside as her patient advocate and personal cheerleader.

The spectacle of Pambuan striding slowly but confidently through the hospital lobby - she had insisted on making her exit without assistance of a wheelchair or walker, although was still connected to supplementary oxygen - marked a transformative victory for the diminutive but tough ICU nurse.

'What We Live For'

The outpouring of affection she received from colleagues - including many of the physicians, fellow nurses and therapists who took part in her care - also reflected a rare moment of communal triumph for the pandemic-weary hospital staff.

"This is what we live for ... seeing our patients going home alive and in good condition," said Dr. Maged Tanios, a pulmonary and critical care specialist at St. Mary. He said Pambuan's recovery was especially rewarding since she is part of the hospital's extended "family."

Tanios said he was not aware of other St. Mary medical staff being admitted to the ICU for COVID. However, studies show frontline healthcare workers' frequent, close contact with coronavirus patients puts them at higher risk of contracting the disease, hence the decision to give them top priority in getting immunized.

Pambuan's discharge, ironically, coincided with the recent rollout of COVID-19 vaccines to medical workers, as well as a crushing surge in coronavirus infections that have overwhelmed hospitals, and ICUs in particular, across California.

Pambuan said she has no recollection of the four months she spent hooked to a breathing machine - from early May to early September - but recalls first waking up from deep sedation unable to move her extremities.

With encouragement from nursing staff and her daughter Pambuan said she grew determined to regain her mobility and her life.

Pambuan spent the last few months of her hospital stay undergoing physical and respiratory rehabilitation and will continue recuperation from home, while making peace, she said, with a change in pace.

"It's going to be very difficult for me," she said. "But I have to accept it, that I'm going to be on oxygen for a while and slow down a little bit."

When or if she will return to work in the ICU remains an open question, she said.

In the meantime, Pambuan said she feels indebted to her co-workers for their "really professional" care, grateful for the support of loved ones and newly convinced of the power of optimism.

Her message to others in her shoes - "Don't lose hope. Just fight. Fight, because look at me, you know. I'm going home and I'm walking."