After days of uncertainty and search operation, this Monday Governor of the Chiang Rai province, Narongsak Osottanakorn bought some relief to the countryman when he first broke the news that all the children are safe and rescue effort is on in full swing. 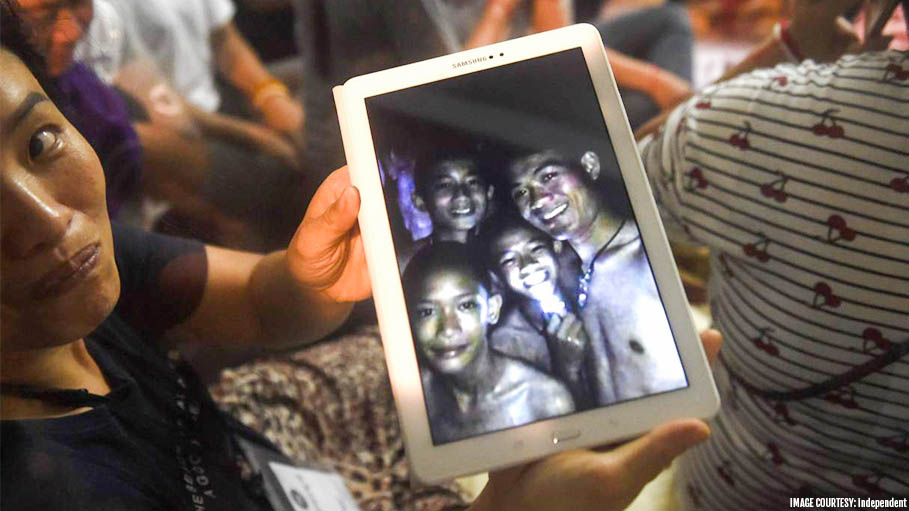 After 9 days of painstaking search by divers, 12 boys and their football coach were rescued from a flooded cave in Thailand, where they were trapped for nine days. The boys aged between 11 years to 16 years went missing since 23rd of June along with their 25-year-old football coach and there had been no contact with their family since then.

The rescue effort took long time because of the heavy rains that continued, resulted in the heavy flooding of the cave, known as Tham Luang Cave, located in the northern part of Thailand. The flood also blocked the chambers, where it was believed that the group would have been taken shelter to save themselves, flood delayed the rescue efforts.

After days of uncertainty and search operation, this Monday Governor of the Chiang Rai province, Narongsak Osottanakorn bought some relief to the countryman when he first broke the news that all the children are safe and rescue effort is on in full swing. As the whole country was desperately following the news after the news of missing children first came up in the public domain.

Narongsak Osottanakorn said, “We found all 13 safe... we will take care of them until they can move. We will bring food to them and a doctor who can dive. I am not sure they can eat as they have not eaten for a while”.

As weather proved to be the biggest hurdle in the rescue effort, when for a brief period on Monday, the rain stopped, divers thronged into action and retreated the boys and rescued them. The boys are a football team and popularly known in the locality as “Wild Boar”.

Family, friends, and teachers of the team “Wild Boar” were hopeful and never gave up hope of seeing them play again. A large number of divers including some foreign experts had been sent inside the cave with more than 100 of oxygen cylinders, that helped them first to establish a base camp inside the cave to continue the rescue effort which took nearly a week, after locating the boys and their coach inside.

The football team with 12 boys and their coach went inside the cave after a training session on June 23rd to save themselves from heavy rain, but were stranded inside after continuous rain blocked the main entrance and dislocated their ways. A forest official first alarmed everyone after he first spotted the bicycles and backpacks near the entrance of the cave complex.

The rescue operation began immediately, at the initial stage the rescuers found the bicycles, backpacks, and boots of the boys near the cave and then discovered their footprints and handprints as they move further inside, which confirmed their presence and raised hope of their survival.

The 10 km long, Tham Luang cave is one of the longest and toughest caves of Thailand and the authorities always warn visitors not to enter the cave during the rainy season between July and November.

SEE ALSO:
Swimming Lesson for the Football Team inside the Cave