It was Anubhav’s mother who suggested that they get married in March this year. It was decided that Anna would come to India in March and thus begin the marriage process. 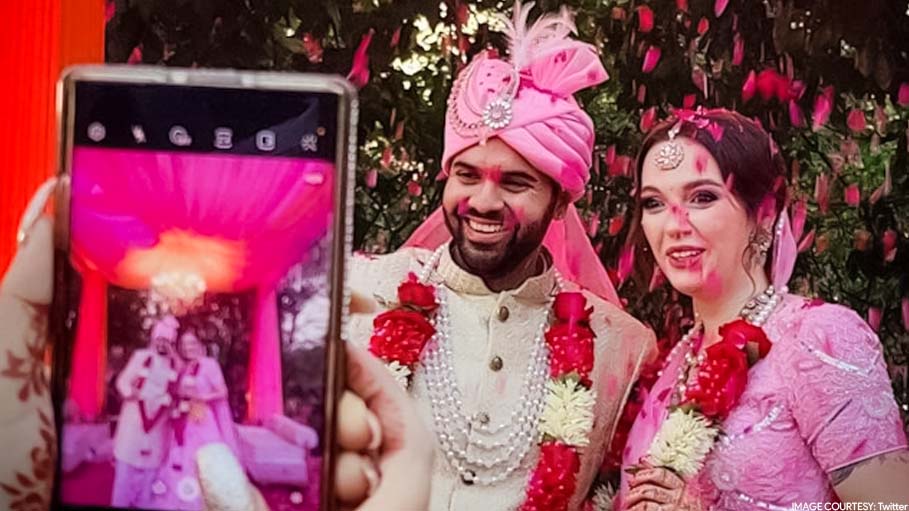 Anna Horodetska and Anubhav Bhasin’s story is nothing short of a fairy tale.

Anna, 30, works for an IT firm and hails from Ukraine while Anubhav, 33, is a lawyer from India.

The couple met when Anna came to India on a solo trip. They exchanged numbers and followed each other on Instagram.

In March 2020 Anna again visited India, this time with a girlfriend. Anubhav took them on a road trip to visit the Taj Mahal and Rajasthan.

As India went into a sudden lockdown during the pandemic, he invited them to stay in his family home in New Delhi.

“It was during that time that we grew very close, we realised we liked each other. We now knew this was more than a fling. After she returned to Kyiv, we kept in touch through daily video calls,” Anubhav says.

They met in Dubai in February 2021 when things started moving forward and fast. Anubhav visited Anna in Kyiv in the month of August and she again visited him in India in the month of December.

It was Anubhav’s mother who suggested that they get married in March this year. It was decided that Anna would come to India in March and thus begin the marriage process.

“But on 24 February, I woke up to the sound of bombing and my first thought was, "Am I dreaming?" Then I saw messages from Anubhav and others confirming that we were under attack,” Anna expressed.

When the situation turned worse Anna moved to a bunker with her mother and her dog.

“It was filled with people. There was a curfew and we weren't allowed to leave the bunker but I had to go out to breathe and walk the dog. The city was filled with the smell of smoke and the sky was so red,” she says.

Even after Anubhav’s advice to leave the place Anna didn’t want to leave her country without her pet dog.

When she finally decided to leave on 26 February the situation had turned worse. Next morning she found a taxi and reached the station. Her mother and her dog boarded a train to her grandmother’s village while Anna boarded a train to Lviv.

She first travelled to Slovakia, then to Poland where she had to wait for two weeks till Anubhav organized her visa with the Indian embassy. She reached Helsinki in Finland to catch a direct flight to Delhi.

On her arrival at the Delhi airport, much to her surprise, Anubhav welcomed her with balloons and music. He went down on one knee, proposed to her and she said yes. He then slipped a ring into her finger and the rest is history.

The couple got married on Sunday in an intimate ceremony.

Their love transcended boundaries, religion and region. Despite all odds and challenges nothing could stop Anna and Anubhav from coming together as man and wife, not even the dreadful Ukrainian war.