See how adorable the celebrity couple was looking at the pre-engagement big bash! 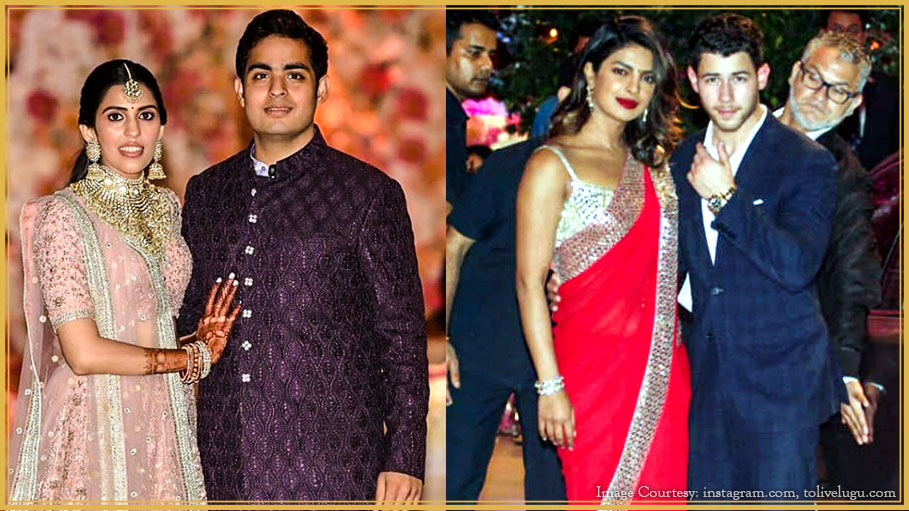 Mukesh and Nita Ambani’s son Akash Ambani and fiancé Shloka Mehta’s pre-engagement party was held in Mumbai on Thursday. Among several high profile guests, Priyanka Chopra and Nick Jonas made a splendid entry as a couple at the star-studded affair.

Akash Ambani is the eldest son of Reliance Industries chairman Mukesh and Nita Ambani and his fiancé Shloka Mehta is the daughter of diamond magnate Russel Mehta. The soon-to-be-married couple is planning to get engaged on June 30. The big names that graced the pre-engagement party in Mumbai were Shah Rukh Khan and Gauri Khan, Ranbir Kapoor and Alia Bhatt, Karan Johar, Sachin Tendulkar and many others.

Shah Rukh and Gauri were among the first couples to arrive. Alia Bhatt made a stunning entry in a pink colored brocade saree from Manish Malhotra’s studios. She styled her hair into a bun and lined it with Gajra. She wore a beautiful pair of ethnic earrings and completed her traditional look with a Bindi. The couple however that stole the show and became the media’s attention were none other than the trending pair Priyanka Chopra and Nick Jonas.

The pair walked into the venue together hand in hand. Priyanka dazzled the crowd and media alike by adorning Abu Jani and Sandeep Khosla’s bright red sari and a golden blouse. The red sari that elegantly clung to her slim figure was teamed with a bracelet and a pair of hanging earrings while Nick Jonas appeared dapper alongside Priyanka in a dark blue suit.

The handsome couple posed together for the glaring cameras before they entered the doors of Antilia (Ambani’s home). The shutterbugs coerced Priyanka to click a solo photo while she charmingly laughed off the idea. After the Goa vacation, the pair was back in Mumbai in time to attend Akash and Shloka’s Mehendi ceremony (Pre-engagement party) in which Priyanka Chopra adorned yet another gorgeous Ivory color sari.  Priyanka took to Instagram to share a picture of the lovely couple alongside her. She captioned the image with these words “Congratulations Akash and Shloka!! Such a beautiful ceremony.. mehendi hai rachne wali.. love you both."

Akash proposed to his beautiful fiancé Shloka whom he knew since childhood, in the month of March. The couple has even pursued their studies together at the Dhirubhai Ambani International School. Shloka’s father heads one of the country’s leading Diamond companies called Rosy Blue Diamonds while she is a Director at the Rosy Blue Foundation. Shloka is also a co-founder of ConnectFor which works to get volunteers for various causes. Though the families haven’t given an official confirmation Akash and Shloka are scheduled to get married in December.