Powerful Hurricane Ian left a trail of destruction and caused a widespread blackout in Cuba on Tuesday, while Florida residents braced for a direct hit from the "extremely dangerous" storm that is already pummeling the US state with high winds. 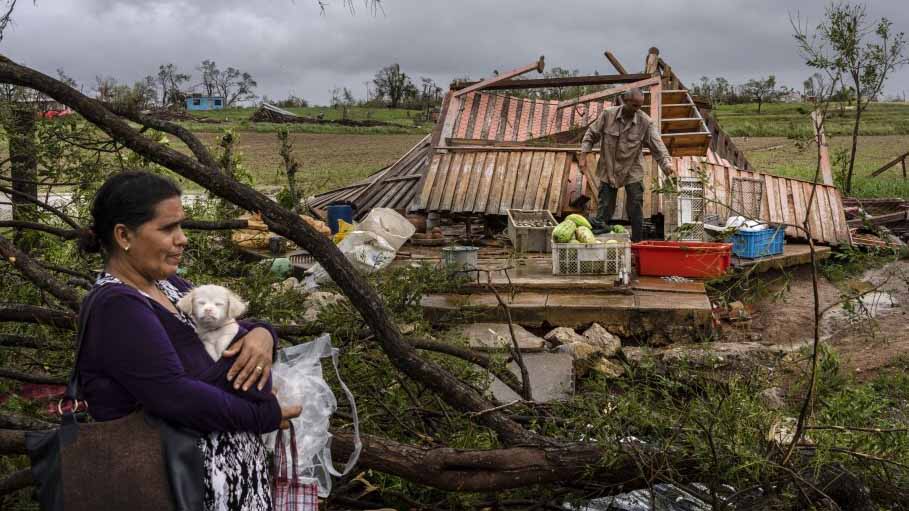 Consolacion del Sur: Powerful Hurricane Ian left a trail of destruction and caused a widespread blackout in Cuba on Tuesday, while Florida residents braced for a direct hit from the "extremely dangerous" storm that is already pummeling the US state with high winds.

Ian hit Cuba's western regions for more than five hours early Tuesday morning, before moving out over the warm waters of the Gulf of Mexico, the Insmet meteorological institute said.

Only a few people with gasoline-powered generators had access to electricity on the island of more than 11 million people. Others had to make do with flashlights or candles at home, and lit their way with cell phones as they walked the streets.

"Desolation and destruction. These are terrifying hours. Nothing is left here," a 70-year-old resident of the city was quoted as saying in a social media post by his journalist son, Lazaro Manuel Alonso.

About 40,000 people were evacuated across Pinar del Rio province, which bore the brunt of the storm, local authorities said.

The US National Hurricane Center (NHC) said it expects Ian to gain strength before hitting the west coast of Florida on Wednesday as an "extremely dangerous" major hurricane.

Calls to heed evacuation warnings were echoed from local Florida officials on up to US President Joe Biden, who said Ian "could be a very severe hurricane, life-threatening and devastating in its impact."

In its latest bulletin, the NHC said to be prepared for "life-threatening storm surge, catastrophic winds, and flooding" in the Florida peninsula.

Tropical-storm-force winds are already battering the Florida Keys, the chain of islands off the southern tip of the state's mainland, the NHC said.

In Cuba, authorities are just beginning to assess the damage, but residents described "destruction" and posted images on social media of flooded streets and felled trees.

At the time of impact, the NHC reported Ian's maximum wind speeds at 125 miles (205 kilometers) per hour, making it a Category 3 storm on the Saffir-Simpson scale. Wind speeds have since dropped slightly to 120 miles per hour.

No deaths or injuries have yet been reported.

In Consolacion del Sur, southwest of Havana, Caridad Fernandez, 65, said her roof was seriously damaged and water came through her front door.

"Everything we have is damaged," she said. "But we'll get through this, we'll just keep moving forwards."

In San Juan y Martinez, a growing hub for Cuba's vital cigar industry, "it was apocalyptic, a real disaster," Hirochi Robaina, from the Robaina tobacco plantation, said on Facebook.

In Florida, Governor Ron DeSantis said 2.5 million people were under evacuation orders as officials scrambled to prepare for the storm's landfall.

DeSantis warned that although Ian's exact path was still uncertain "the impacts will be far far broader."

"When you have five to ten feet (1.5 to 3 meters) of storm surge that is not something that you want to be a part of. Mother Nature is a very fearsome adversary," DeSantis said.

The NHC warned that "widespread catastrophic flash, urban, and river flooding is expected across central and west Florida beginning midweek."

Thirty-year-old Chelsea Thompson, who was helping her parents board up their home in a mandatory evacuation zone southwest of Tampa, said that "the closer it gets, obviously with the unknown, your anxiety gets a little higher."

The Pentagon said 3,200 national guardsmen had been called up in Florida, with an additional 1,800 coming later.

Authorities in several municipalities, including Miami, Fort Lauderdale, and Tampa, were distributing free sandbags to help residents protect their homes from flooding.

Biden has preemptively approved emergency aid in Florida through the Federal Emergency Management Agency (FEMA), while even NASA on the state's east coast took precautions, rolling back its massive Moon rocket into a storage hanger for protection.

Like DeSantis, FEMA administrator Deanne Criswell highlighted the danger of storm surge, saying it was the agency's "biggest concern."

"If people are told to evacuate by their local officials, please listen to them. The decision you choose to make may be the difference between life and death," she said.

The Caribbean and parts of eastern Canada are still counting the cost of powerful storm Fiona, which tore through last week, claiming several lives.

Half a million residents in the US territory of Puerto Rico were still without power, according to a tracking website.