Cristiano Ronaldo claimed his teammate Bruno Fernandes' goal in Portugal's crucial 2-0 win over Uruguay. Fernandes scored a brace against La Celeste as Portugal became the third team to qualify for the round of 16 of the ongoing FIFA World Cup in Qatar. 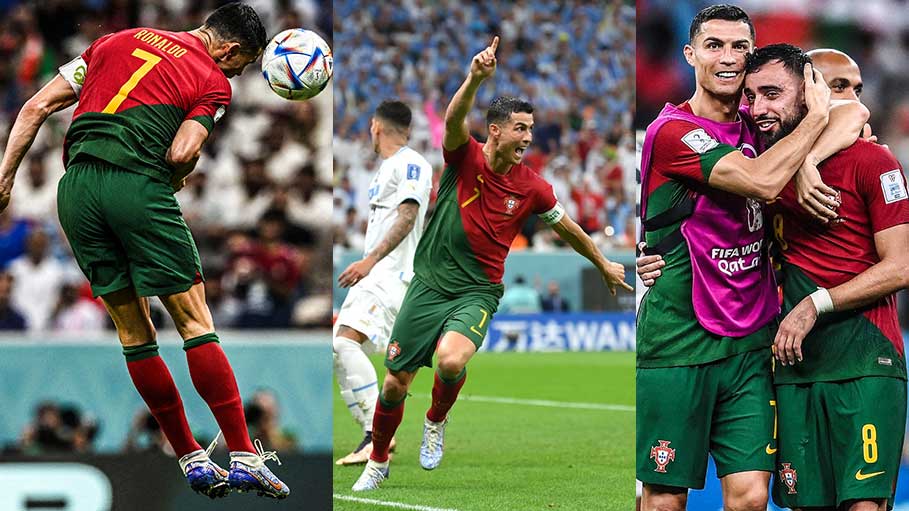 When Bruno Fernandes and Cristiano Ronaldo met up on the eve of this World Cup, it is fair to say the relationship looked a little strained.

Fernandes denied there was any issue - of course he did - but whatever the reason for the pre-tournament frostiness, it is fair to say the Portuguese pair are getting along famously again.

So maybe Fernandes will only chuckle and forgive Ronaldo for trying to claim the goal that swayed this contest in Portugal’s favour and helped secure their place in the knockout stages. But being the two players who brought a bit of class to fairly ordinary proceedings, perhaps the pair deserved to share the credit anyway.

The former Real Madrid, Manchester United and Juventus forward thought he had opened the scoring for his national team in the 54th minute, when he met Fernandes’ beautifully floated cross in the box with a glancing header to beat Sergio Rochet in goal.

He went ahead and celebrated the goal with Fernandes. However, upon further scrutiny of the goal, it was decided that Ronaldo had not touched the ball on its way to the goal. Hence, the goal was awarded to Fernandes.

However, Uruguay did not sit back and came close to leveling the score. Substitutes Maxi Gomez and Luis Saurez were each presented with a chance to score against Portugal. In the 75th minute, Gomez hit the post with a vicious first-time strike from distance. Just minutes later, Suarez fired a powerful left-footed shot, which missed the goal by inches, finding the side-netting.