The Ambassador of the European Union to India, Tomasz Kozlowski who initiated his talk by praising the state of the art infrastructure the B-school has provided to its students, discussed why India is an important nation to the European Union in terms of working together. 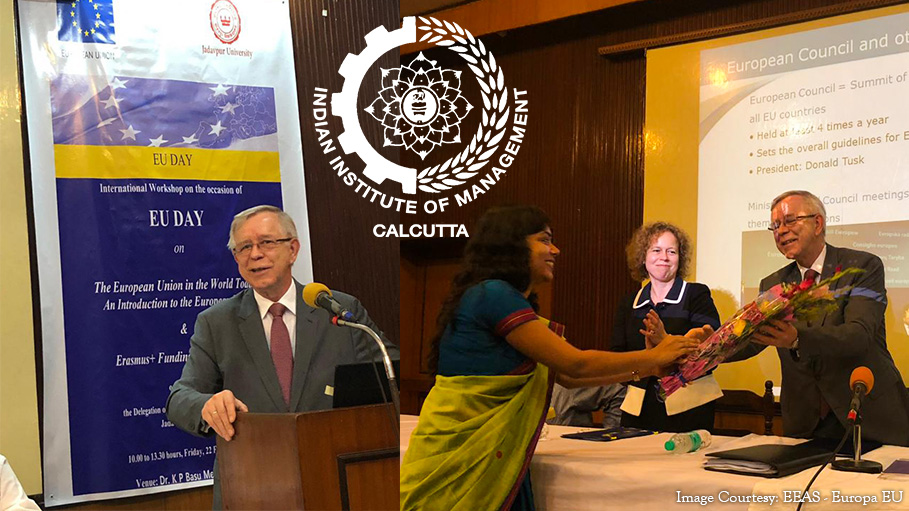 The EU Day hosted at The Indian Institute of Management, Calcutta on Feb 22, 2019, witnessed esteemed delegates from the European Union visit the campus and enrich students with knowledge of the harmonious EU-India relations and shed light upon the various ways the two entities are working towards nurturing them. Prof. Anju Seth, Director, IIM Calcutta; and Prof. Prashant Mishra, Dean, New Initiatives & External Relations, hosted the delegation and led the interaction. The Ambassador of the European Union to India, Tomasz Kozlowski who initiated his talk by praising the state of the art infrastructure the B-school has provided to its students, discussed why India is an important nation to the European Union in terms of working together to find solutions for issues impacting the globe, namely climate change, security concerns, global economic governance and science & education.

Tomasz Kozlowski highlighted that there is a need for both nations to cooperate for a sustainable organization, modernization, trading and finding business and financial solutions. There is also a necessity for partnership for ‘blue economy’. His speech was followed by a Talk on “EU-India trade and economic relations” by Marika Jakas, Counsellor and Head of the Trade and Economic Affairs Section, Delegation of the European Union to India. She established that the EU is India’s biggest trade partner and as a nation is extremely crucial in developing strategic ties with Asia. She mentioned that the EU and India have policy dialogues to develop in the renewable sector and Government Procurement is where they would like to have equal footing. She even stated that EU has a dialogue with India in the macro-economic area.

Dónal Cannon, EIB Head of Regional Representation for South Asia, delivered a talk on “EU, India and Climate Action – a Joint Implementation”. He described India as ‘Emerging Global Economic Engine’. He said that in order to address the infrastructure gap in India that could solve its issues in the areas of climatic adversity, it needs to source money from international finances. He stated that India received a grant of 8 million euros from the EU to set up prerequisite equipment in Tamil Nadu and Gujarat. India is predicted to have 5 gigawatts in offshore wind capacity by 2025.

The session was concluded with Prof. Prashant Mishra, Dean, New Initiatives and External Relations, IIM Calcutta thanking the delegates on behalf of the institution for attending the session and enlightening the audience with their thoughts, insights and mutual concern for addressing global concerns jointly with India.