On Tuesday, the sketch of a man was released who threatened Stormy Daniels in 2011. Anyone who can identify the perpetrator will be offered a reward. 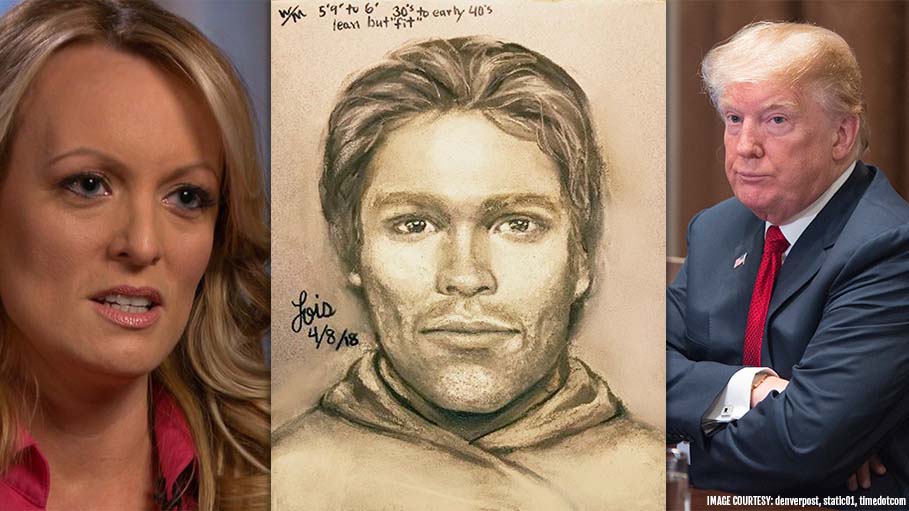 On Tuesday, the sketch of a man was released who threatened Stormy Daniels in 2011. Anyone who can identify the perpetrator will be offered a reward of $100,000.

Stormy Daniels admitted that she had a sexual encounter with Donald Trump in 2006. Daniels signed an agreement just days before the 2016 elections in exchange to stay quiet regarding the ‘Trump affair.’ Daniels is now suing Trump and wants the agreement to be declared void as Trump had never signed the agreement personally.

Earlier in an interview with Anderson Cooper from ‘60 seconds’, Daniels admitted that after the Trump saga ended she was prepared to sell her story to the sister publication of ‘In Touch’ magazine for $15,000 dollars, however, when the news of this reached Trump and his team, they threatened to sue.

Around the same time, when Daniels was in Las Vegas preparing to go to a fitness class with her infant daughter, a man approached her. “Leave Trump alone. Forget the story.” He then looked at her daughter and said “That’s a beautiful little girl. It’d be a shame if something happened to her mom.” It is the sketch of this person that has been released.

The sketch has been drawn by Lois Gibson and going by her bio she has helped law enforcement identify 700 criminals with her sketches.

Daniels’ lawyer- Michael Avenatti told the ‘View’, that they know who sent the man who allegedly threatened Daniels. Daniels and Avenatti are sure that the person who made the threat was not Michael Cohen (Trump’s lawyer) or Trump’s longtime bodyguard Keith Schiller.

Meanwhile, raids have taken place in Michael Cohen’s home, office and hotel room. They investigated his “personal business dealings.” Mr. Cohen has requested the court to give his own lawyers the authority to have the first look at the seized materials to identify the documents that are protected by attorney-client privilege.

Trump’s lawyers have also put their request forward to review documents that might be related to the President in any way. The judge announced on Monday that Cohen’s lawyers will get the chance to review the seized materials and declare what needs to be protected by attorney-client privilege. And Trump’s lawyers will be given the same privilege to review any records that are related to the President. The judge is now considering whether an independent team should be considered to decide what the investigators can review.