The brand ambassador of Lakme Absolute oozed oodles of oomph and confidence while she lit the ramp in her electrifying ensemble. 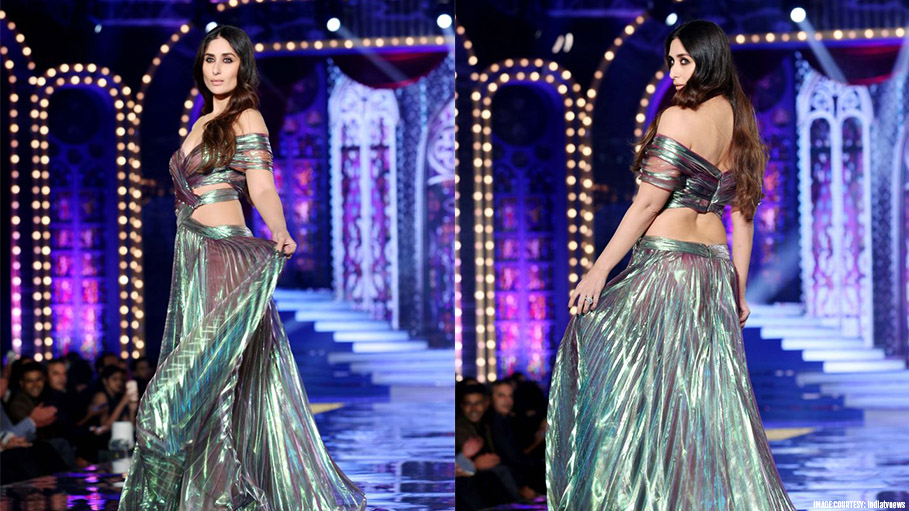 At the Lakme Fashion finale, Kareena Kapoor turns the heat on once again. The Diva turned heads as she walked the ramp as a showstopper for designer Monisha Jaising in Mumbai.

The actress looked stunning in a metallic hued, holographic off-shoulder gown with cutouts. The actress chose to go bare and wear no accessories at all. She chose to leave her long flowing hair open which was styled into loose waves. The ‘Veer Di’ actress also opted for a nude makeup look. The brand ambassador of Lakme Absolute oozed oodles of oomph and confidence while she lit the ramp in her electrifying ensemble. The actress once again proved that when it comes to fashion shows, she is a pro. After completing her walk on the ramp, the actress was joined on stage by designer Monisha Jaising, who introduced the new collection ‘Shades of a Diva’ to the audience comprising of metallic finishes, embellishments, and glitter.

Kareena Kapoor often walks the ramp for her designer friends and looks like her hands-on experience has made the Bollywood star an expert when it comes to ramp shows. The actress threw a surprise when she announced that she’s launching her new makeup line titled ‘Kareena Kapoor Khan by Lakme Absolute.’ At the LFW appearance, the actress said, “It has been great as we have been associated for almost eight years so it has been a long collaboration and make-up is something every actor wears so coming together to do a make-up tie up, I think the timing has been just perfect."

Apart from Kareena Kapoor, there were plenty of other Bollywood personalities who graced the ramp at the finale. Model and actress Lisa Haydon took the center stage and looked mesmerizing in a black and silver ensemble. Just like Kareena, Haydon opted for minimal make-up. She completed her look with soft curls.

Model and actress Diana Penty lit the ramp for Disha Patil’s Precouture in a floor-length shimmering peach ensemble. The actress let her long, straight hair loose, while a long shimmering veil hooked to her hair flowed down to the ramp. The actress gracefully trailed the two-piece ensemble and then, at last, was seen escorting the young designer Disha Patil.

The five-day long Lakme Fashion gala which began on August 22 finally laid the curtains down this Sunday with great pomp, show, and allure.

Watch Kareena walk the ramp at the event.