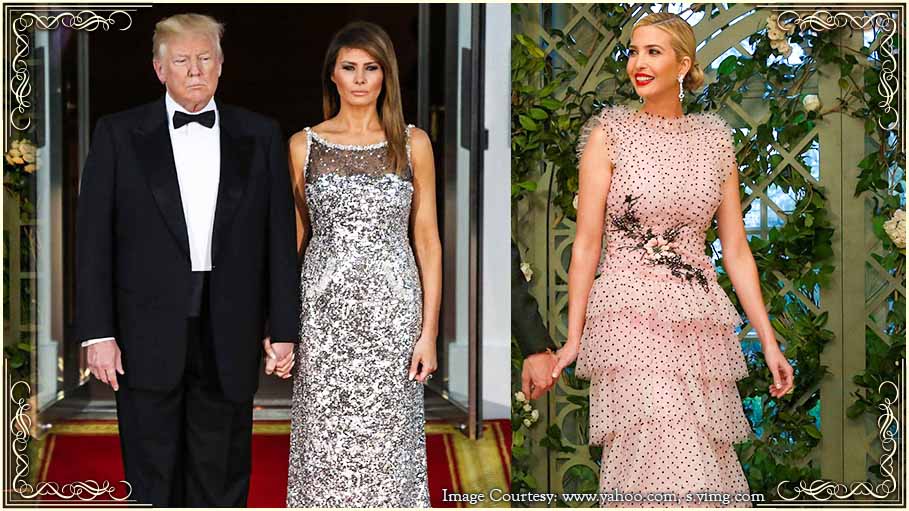 It was the first state dinner of the Trump administration being hosted in honor of the French President Emmanuel Macron and his wife Brigitt. It was also a big moment for Melania Trump who was preparing for it for a month. Apart from the grandeur, the red carpet, the shiny silverware and the guest list, it was the fashion that stood out.

The first lady looked glamorous in a sleeveless haute couture gown by Chanel. It was a gold dress, hand painted with silver having a sheer neckline and shimmery silver bodice. Her dress was covered with crystals. It clung delicately to her body, showing her curves and she looked stunning in it. Earlier in the day, Melania wore a head-turning hat and a suit by Michael Kors.

Melania ‘s dress was featured during the French fashion house’s Spring 2018 show as a jumpsuit. Melania’s dress may have been custom made.

Ivanka Trump also turned heads at the state dinner held at the White House. Trump’s eldest daughter wore a stylish number which was fresh and belonged to an American label. She wore a pink polka dot Rodarte dress. The dress was made of pink tulle had a ruffled skirt and a floral embellishment around the waist. This popular ballerina-styled design was also worn by Millie Bobby Brown and Kirsten Dunst on the red carpet. It also has a whopping price tag.

The mother of three looked stylish and stunning in her ensemble as she arrived at the State dinner with her property millionaire husband, Jared Kushner.

Brigitte Macron, the French first lady looked elegant in a Louis Vuitton number. She wore a long ball gown with long sleeves and a golden brocade. She has been sporting Louis Vuitton the whole week and did not deviate from it.

In 1991, Barbara Bush opted for a pink skirt with a lace jacket and a double strand of pearls.

In 1987, Nancy Reagan opted for an off-the-shoulder red gown with a bow at the waist.

Hillary Clinton wore a red chiffon dress designed by Victoria Royal in 1994 and she wore a metallic A-line gown in 1997.

In 2009, Michelle Obama wore a glittering gold strapless dress by Indian-American designer Naeem Khan. She donned a gold wrap and a wrist full of bangle bracelets. For her 2011 state dinner, Michelle wore a petal silk organza gown by Alexander McQueen.