Pele, Maradona, Messi: Who Is The Greatest of All Time?

Pele played in four World Cups, winning three times, a record not yet beaten and giving him one more than Maradona and Messi combined. 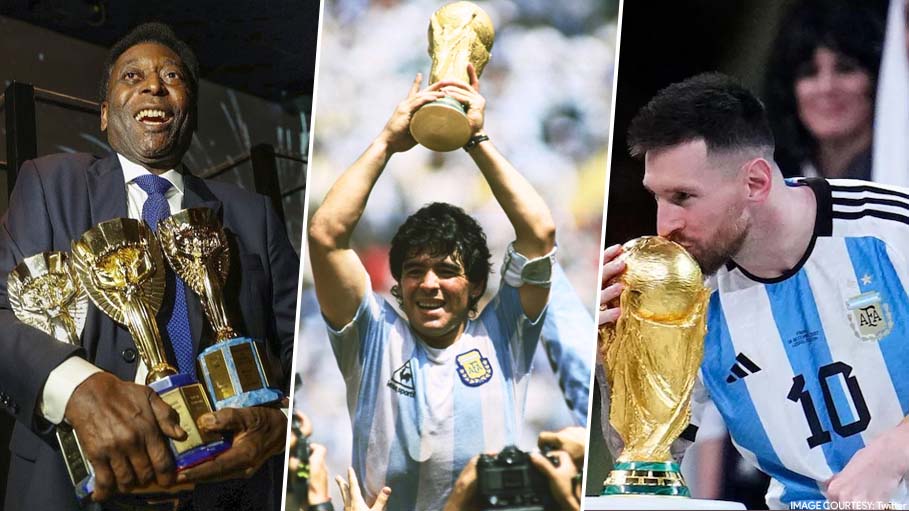 When FIFA declared Pele and Diego Maradona jointly the players of the 20th century, and effectively the best of all time, they side-stepped but did not resolve a heated debate that has grown more complicated as Lionel Messi has dominated the 21st century. Just who is the greatest? Pele, who died on Thursday, and the two Argentines all won the sport's greatest prize -- the World Cup -- and were undoubtedly the kings of their eras.

AFP Sport looks at who is the best between the magical Brazilian, the controversial Maradona, who passed away in November 2020 at the age of 60, and a second Argentine, the twinkling Messi who is still playing:

Pele played in four World Cups, winning three times, a record not yet beaten and giving him one more than Maradona and Messi combined. He was just 17 in 1958 when he was world champion in Sweden, scoring six goals, two in the final. Pele was injured in the second match as Brazil won the 1962 World Cup but claimed a third title, and sealed his international reputation, in 1970 as his magical side beat Italy in the Mexico City final.

Maradona, not picked in the squad that won the World Cup at home in 1978 and sent off in a tournament-ending 3-1 loss to Brazil in Spain in 1982, shot to global fame in 1986 for the right and wrong reasons. His infamous 'Hand of God' goal against England was followed by an individual effort voted FIFA's 'Goal of the Century'. He scored twice in the semi-final win over Belgium and supplied the crucial pass in the 3-2 win against West Germany in the final.

After Messi completed his World Cup quest in Qatar this month, the ailing Pele saluted on Instagram: "Messi winning his first World Cup, as his trajectory deserved. Diego is certainly smiling." The Argentine has a complete set of major medals: a World Cup (2022), a Copa America (2021), four Champions Leagues and three Club World Cups as well as a multitude of domestic Spanish and French trophies.

All three men wore the No 10 shirt. Pele's role was often described as a "nine and a half", his attacking skills yielding 1,281 goals in 1,363 matches for his clubs, Santos and New York Cosmos, and the Brazilian national team.

Maradona, known as "D10S" (a word play with the number 10 and God in Spanish) played in a free role, more the playmaker, and his career statistics reflect that: 345 goals in 692 matches.

Messi, who plays a variety of attacking positions, has also piled up the goals: 793 in 1,003 professional matches by the end of 2022.

Role model v a rebel and a quiet child--

Maradona played for six teams, was sent off at the 1982 World Cup, scored with his hand against England in the 1986 tournament, was banned in Spain for fighting on the pitch, and was sent home in disgrace from the 1994 World Cup after failing a drugs test. He also suffered a cocaine addiction.

Messi, the quiet child, resembled Pele in his loyalty to his first club Barcelona until their money troubles allowed Paris Saint-Germain to pry him away in 2021. His difficulties with the Spanish tax authorities and a host of sponsorship deals have not tarnished his image.

Ego wars until they reconciled in 2016, Pele and Maradona sparred over who was the greatest. Pele has a museum. Maradona said Pele belonged "in a museum".

Maradona, who enjoyed showing off his Fidel Castro and Che Guevara tattoos, mocked the Brazilian's respect for authority.

Pele condemned Maradona as "not being an example" to youngsters because of his drug problems.