Search ‘Idiot’ on Google Images and Get Donald Trump

Google Images search results are showing snaps and impressions of the US President when searched by the word ‘Idiot’. Here's more! 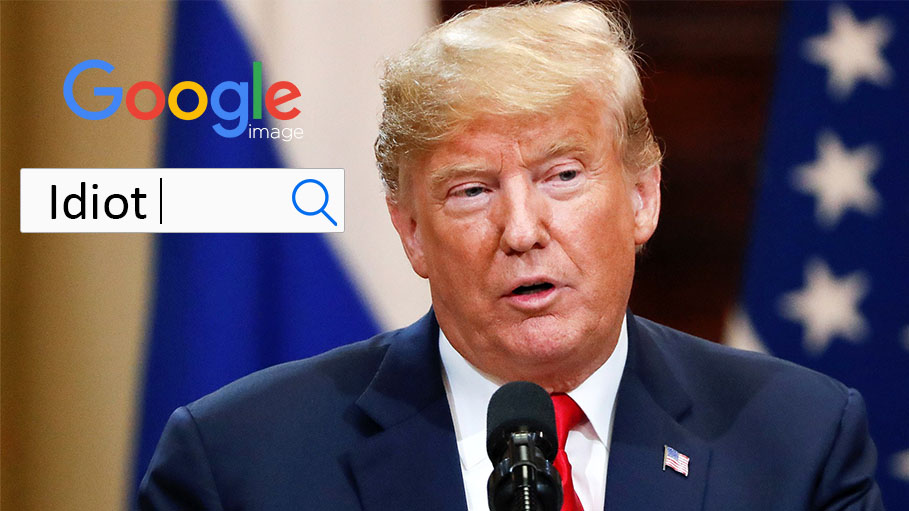 Such bizarre search results started popping up since last week, specifically after Trump’s visit to the UK. But it was even before Trump’s visit that the popular song ‘American Idiot', by Green Day topped the British charts and the 2004 album is still enjoying its sudden upsurge.

The more people are searching for it, the more Trump photos are acquiring the ‘Idiot’ position on Google Images. Just type in I-d-i-o-t, and you'll get Mr. President's face all over, framed in different expressions!

However, no matter how much assaulting Mr. Trump finds this ‘Idiotic’ affair on Google, this is all because of Google’s Algorithm. And as per company policies, any big-shot on earth would have hard luck in making the Google authorities intervene in amending the search result.

“A site’s ranking in Google’s search results relies heavily on computer algorithms using thousands of factors to calculate a page’s relevance to a given query… Sometimes subtleties of language cause anomalies to appear that cannot be predicted… Accordingly, we do not remove a page from our search results simply because its content is unpopular or because we receive complaints concerning it.”, explained by the company.

But it is not Trump alone, who’s face comes up while typing ‘Idiot’ in the Google Images search box. Journalist and activist Ash Sarkar appears on the first row who called transphobic Piers Morgan an ‘idiot’ to his face.

And believe it or not, more surprises are waiting if you scroll down a bit. Scientist and genius Alfred Einstein’s face bobs up few rows below, followed by personalities like Elon Musk, Mark Zuckerberg, and the list is quite long.

Now, if you try to go back in time, you’ll surely find out that such ridiculous Google search result instances are not very rare and keep happening from time to time. During 2009, ‘Michelle Obama’, being typed into the search bar gave out results of ape faces that were apparently put up to mock the then first-lady of America.

In 2016, former American President Bill Clinton became a victim of the word ‘rapist’ on Google search.

Apart from this ‘Idiotic phenomenon’, the resurge of ‘American Idiot’ offers a pretty smart opportunity to this generation to tune in to this popular song by the American rock band and shake it to the ground, if they please!