Syria: From A Peace Protest to Civil War

Nearly seven years ago a peaceful uprising against the President of Syria Bashar Al Assad, has took the shape of a civil war over the years, killing more than 300,000 people, destroying the country. 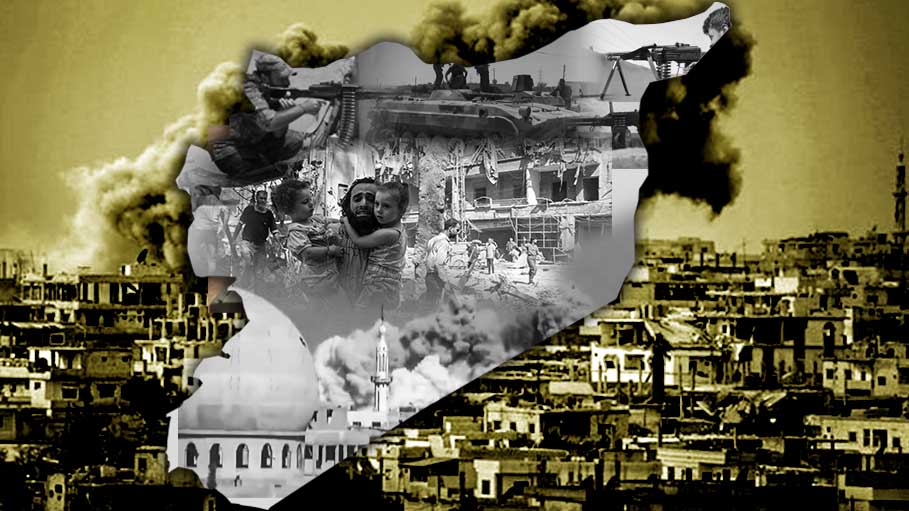 It would be surprising for everyone of us to know that, nearly seven years ago a peaceful uprising against the President of Syria Bashar Al Assad, has took the shape of a civil war over the years, killing more than 300,000 people, destroying the country, attracting the global powers.

It all began in 2011 when the youth of the country started raising voice against the government complaining about the increasing rate of unemployment, corruption, political freedom and repression against President Bashar Al Assad, who has succeeded his father Hafez in 2000.

By March 2011, pro-democracy demonstrations started in the southern city of Deraa. Government used extreme force to curb this demonstration resulting in a countrywide protest demanding the removal of the President.

Along with the protesters, the opposition too joined the movement and taken up arms first to defend themselves and later to attack security forces from local areas. President Assad vowed to crush terrorism and restore state control.

But the movement gradually descended into civil war as hundreds of rebel brigades were formed to battle government forces for control of the country. Now, it has become more than just a battle between those for or against Assad.

A key factor has been the intervention of regional and world powers, including Iran, Russia, Saudi Arabia and the United States. Their support for the Syrian government in terms of political, military and financial support has done more bad than good intensifying fight, turning Syria into a proxy battleground.

Jihadi groups have also seized on the divisions and their rise has added a further dimension to the war. Rebel group such as Hayat Tahrir al-Sham have formed an alliance with the banned terror outfit Al-Qaeda-affiliated Al-Nusra Front, which controls large parts of the northwestern province of Idlib.

Meanwhile, Islamic State (IS), which controls large swathes of northern and eastern Syria, is battling government forces, rebel brigades and Kurdish militias, as well as facing air strikes by Russia and a US-led multinational coalition.

For Russia the survival of President Assad's is very important, so to maintain its interests in Syria. It showed its support by launching an air campaign in September 2015 with the aim of stabilising the government. Intense Air and Missile strike by Russia played a major role in the government's siege of rebel-held eastern Aleppo, which fell in December 2016.

On the other hand United States of America accuses President Assad holding him responsible for widespread atrocities. United States is also fearful that advanced weapons might end up in the hands of jihadists. Therefore it has conducted air strikes on IS in Syria since September 2014 and destroying an air base.

Syrian government has the support of Iran who is spending billions of dollars providing military support and weapons, as well as lines of credit and oil transfers. It is also widely reported to have deployed hundreds of combat troops in Syria.  Syrian President Assad is Iran's closest ally and through Syria which is the transit point of the Iranian weapons shipments to the Lebanese Shia Islamist movement Hezbollah, which has sent thousands of fighters to support government forces.

On the other hand, Sunni ruled Saudi Arabia, in order to counter the influence of its rival Iran has been a major provider of military and financial assistance to the rebels including those with Islamist ideologies. Turkey is another staunch supporter of the rebels.

In this battle for power, the victims were largely the innocent citizens. According to United Nations, at least 250,000 people have been killed in last five years. However, the organisation stopped updating its figures in August 2015. In February 2016, according to a think tank, the conflict had caused 470,000 deaths, directly or indirectly.

Almost 85% of Syrians live in Poverty with more than two-thirds of the population in either extreme or abject poverty. Food crisis and health care facility is scarce; 12.8 million people in Syria needs health care assistance and more than seven million are facing food crisis amid rising prices and food shortages. Households spend up to a quarter of their income just on water. Some 1.75 million children are out of school. United Nations says five million people most of them women and children have fled Syria.

As both the sides are not ready to surrender, international community has time to time devised some solutions without results. The UN Security Council has called for the implementation of the 2012 Geneva Communiqué, which suggested a transitional governing body with full executive powers.

In 2014, peace talks were initiated, named Geneva II, the talks broke down only after two rounds, with the UN blaming the Syrian government's refusal to discuss opposition demands. There were series of talks involving International power without any solution and the war continued with regular interval.

The Syrian government controls four biggest cities with the fall of Aleppo in 2016. But large parts of the country are still held by other armed groups.

About 15% of Syrian territory is under the control of Rebels and Jihadis. Central province of Homs, the southern provinces of Deraa and Quneitra and the eastern Ghouta agricultural belt outside Damascus are under the control of rebels. IS on the other hand still hold large parts of central and northern Syria, including the city of Raqqa.

The recent attacks in Syria, in particular the eastern district of Ghouta, proves the war is not yet over with international backing the government is on, without any concrete outcome to discuss and talk peace. It seems, the attacks and counter attacks are going to continue, until all humanity is lost.