Thousands of Ukrainians fleeing war with Russia started arriving in neighbouring central European countries on Thursday and the region braced for many more, setting up reception points and sending troops towards the borders to provide assistance. 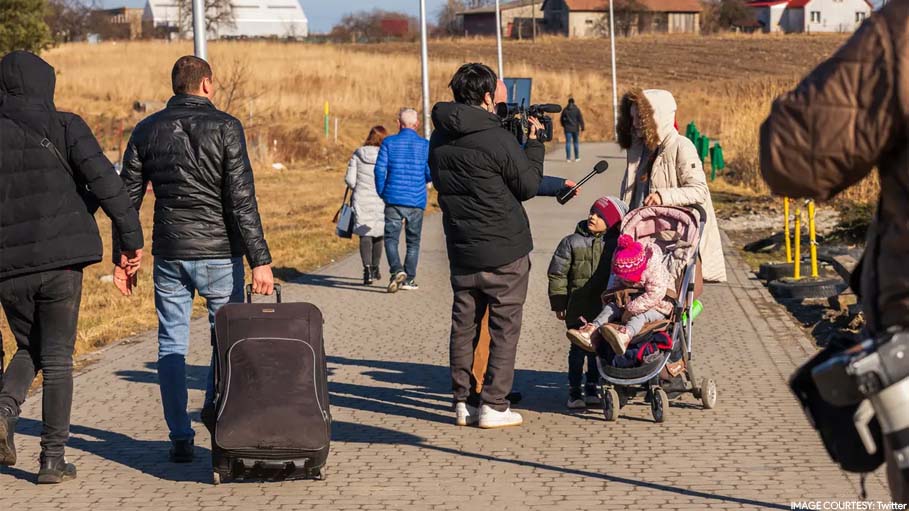 Medyka, Poland/Bucharest: Thousands of Ukrainians fleeing war with Russia started arriving in neighbouring central European countries on Thursday and the region braced for many more, setting up reception points and sending troops towards the borders to provide assistance.

The countries on the European Union's eastern flank were all once part of the Moscow-led Warsaw Pact and are now members of NATO. Among them, Poland, Hungary, Slovakia and Romania all share land borders with Ukraine.

Russia has launched an all-out invasion of Ukraine by land, air and sea, the biggest attack by one state against another in Europe since World War Two. It has fuelled fears of a massive flood of refugees fleeing Ukraine, a nation of 44 million people.

At the usually quiet border crossing at Medyka in southern Poland, dozens arrived from Ukraine on foot on Thursday morning, carrying luggage. A line of cars waiting for passage grew longer during the course of the day.

A Polish woman, Olena Bogucka, 39, said she had been waiting for four hours while her Ukrainian husband and child were stuck on the other side.

To facilitate border crossings, Poland lifted quarantine rules on Thursday for people arriving from outside the EU without a lab-certified negative COVID-19 test.

The country is home to the region's largest Ukrainian community, numbering around 1 million, and is the easiest EU country to reach from Kyiv.

Warsaw called for the "fiercest possible sanctions" against Russia.

Hungary's Prime Minister Viktor Orban, who has also forged good ties with Putin, condemned Moscow's actions, too. He said Hungary would prepare humanitarian aid for Ukraine and was ready to receive refugees.

Groups of people fled into Hungary via the Beregsurany and Tiszabecs crossings, some coming from as far as Kyiv, a Reuters eyewitness said. Some arrived by car but many pedestrians were also hauling suitcases across.

"No one wants to get conscripted, no one wants to die," said Tamas Bodnar at the border with Hungary. "It's clear that those who can, they flee."

Several hundred people also left Ukraine from a sliver of its territory sandwiched between Moldova and the Black Sea, crossing into Romania by ferry over the Danube river, local authorities said.

Slovak customs officials said passenger cars were having to wait up to 12 hours at the busiest of Slovakia's three road crossings with Ukraine.

Tens of thousands of Ukrainians work in Slovakia and Hungary, which has a large ethnic minority of around 140,000 living just inside Ukraine's border.

Poland was preparing a medical train to transport wounded Ukrainians and drew up a list of 1,230 hospitals that could admit the injured, the health ministry said. The Polish army raised the level of preparedness of some units.

"We will do everything to ensure that every person who enters the territory of Poland has access to healthcare, including hospitalisation," the ministry said.

Poland set up reception points for refugees near border crossings.

Slovakia also said it was ready to help refugees.

"Please let's have compassion and understanding for them," Prime Minister Eduard Heger said.

The governor of Slovakia's eastern Kosice region, Rostislav Trnka, told Reuters around 2,000 beds and some 60 gyms had been prepared to help house refugees.

The Czech Republic, which does not border Ukraine but is home to 260,000 Ukrainians, also said it was ready to help refugees. Czech Railways offered rail cars with 6,000 seats and beds to help evacuate people if necessary.

Romania is ready to grant humanitarian aid if needed, President Klaus Iohannis said on Thursday, while Bulgarian President Rumen Radev said his country was preparing to evacuate by land more than 4,000 ethnic Bulgarians from Ukraine and was ready to host other Ukrainian refugees.

A Polish government spokesman said Polish diplomatic missions in Ukraine would remain open "as long as possible" but the foreign ministry urged all Polish citizens to leave Ukraine.

Germany offered humanitarian help to countries bordering Ukraine. German media have cited estimates that between 200,000 and one million people may flee to the EU from Ukraine.