To many Israelis, the West Bank is the ancestral land of the Jewish people, seized from Jordan in the 1967 Middle East war. 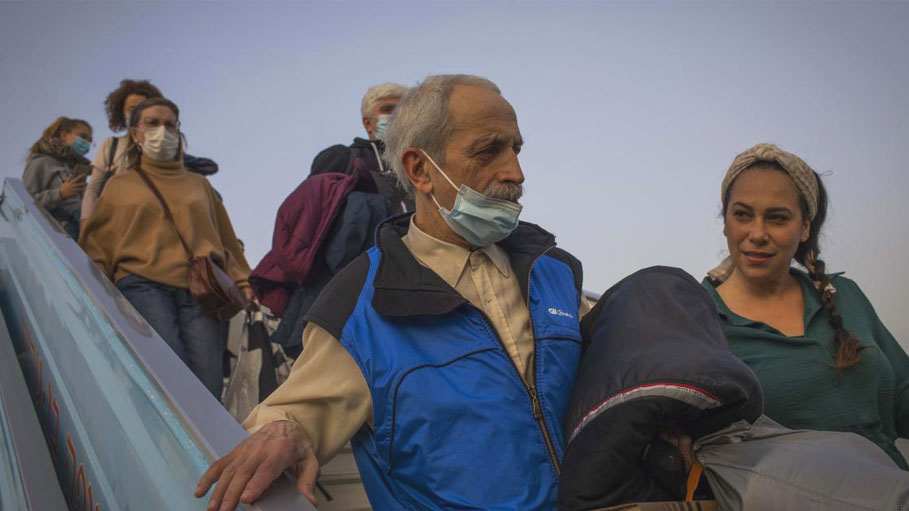 Maale Adumim, Palestinian Territories: After the Russian invasion of Ukraine, Olena and Eduard German, a Jewish couple from Kharkiv, found refuge in an Israeli settlement in the occupied West Bank.

Six months since the start of the war in their homeland, the Germans are rebuilding their lives in a new home decorated with Israeli flags in Maale Adumim, a settlement of over 42,000 between Jerusalem and the Dead Sea, regarded as illegal under international law.

The February 24 Russian invasion triggered the largest refugee crisis in Europe since World War II, leaving over 6.8 million Ukrainians registered as refugees across the continent, according to the latest United Nations figures.

Israel itself has welcomed more than 30,000 Ukrainians, including 12,000 Jews who made "Aliyah", or immigrated under the Law of Return which offers automatic citizenship to people with Jewish roots.

The couple, who were university lecturers, recalled their terrifying exodus out of Kharkiv, a city near the Russian frontier in northeastern Ukraine, on a gruelling two-day drive for the relative safety of Lviv in Ukraine's west.

"Please don't look out the windows, you've got to have good memories"  of Kharkiv, Olena told her three young children, as their convoy, organised by local Jewish organisations, set off.

From Lviv, local charities helped them reach Budapest, where they met with officials from Israeli organisations that helped organise their Aliyah.

Initially given accommodation in Nof Hagalil, a city in the north of Israel, the family was determined to settle in Judea and Samaria, the biblical Jewish term for the West Bank, and set about finding a place to live in a settlement.

Shortly after the Russian invasion, the Yesha Council, the umbrella organisation representing the 475,000 Israelis in the West Bank, was one of the Israeli groups that sent teams to border countries and then Ukraine, where they provided counselling services and distributed aid.

Yet they had more to offer Ukrainian Jews -– a new homeland.

"Those who want to make Aliyah, we offer them an option to live here and we can put them in contact with the regional authorities and with Russian-speaking families who can accompany them in their integration process," Yesha Council director Yigal Dilmoni told AFP.

"If you are living here, in the land of the Bible, it makes your Aliyah to Israel more meaningful," said Dilmoni in reference to the West Bank.

According to Dilmoni, around 60 Ukrainian families, including the Germans, have moved to the West Bank since the refugee crisis began.

From occupied to 'occupier'

To many Israelis, the West Bank is the ancestral land of the Jewish people, seized from Jordan in the 1967 Middle East war.

But the international community sees Israel's control of the territory and the settlements it built there as illegal and an obstacle to a possible peace agreement with the Palestinians.

Earlier this year, Palestinian president Mahmud Abbas expressed concern Ukrainian Jews would flee the war to join other expats from the former Soviet Union in settlements.

He also accused the West of "double standards" over the sanctions imposed on Russia but not on Israel for its invasion of the West Bank.

To Dianna Buttu, a Palestinian human rights lawyer, sending Ukrainians to settlements was a cynical exploitation of their plight.

"The Ukrainians are fleeing occupation and they are fleeing war, only to then turn into tools of war criminals, and to be settling in war crimes themselves," she told AFP.

Eduard, who left under an exemption from military service for men with three children or more, rejects any suggestions that he has fled Russian occupation only to become an occupier himself.

"I can't understand how Judea could be occupied by Jews," he told AFP.

To him, the parallel should be drawn not between Russia and Israel, but rather Ukraine and Israel.

"Ukraine is now a young state that is fighting for its independence, which it received after the collapse of the Soviet Union," Eduard said.

"Israel also walked this path a little earlier," he said, without reference to Palestinian aspirations for statehood in the lands in which his family have chosen to settle.