Zoya Akhtar’s ‘The Archies’ Teaser is Out; It is Impressive and Features All Fresh Faces

The first look of ‘The Archies’ helmed by director Zoya Akhtar was released by Netflix on Saturday. The teaser will instantly grab your attention as it is unlike any of the contemporary teasers that you’ve seen lately. 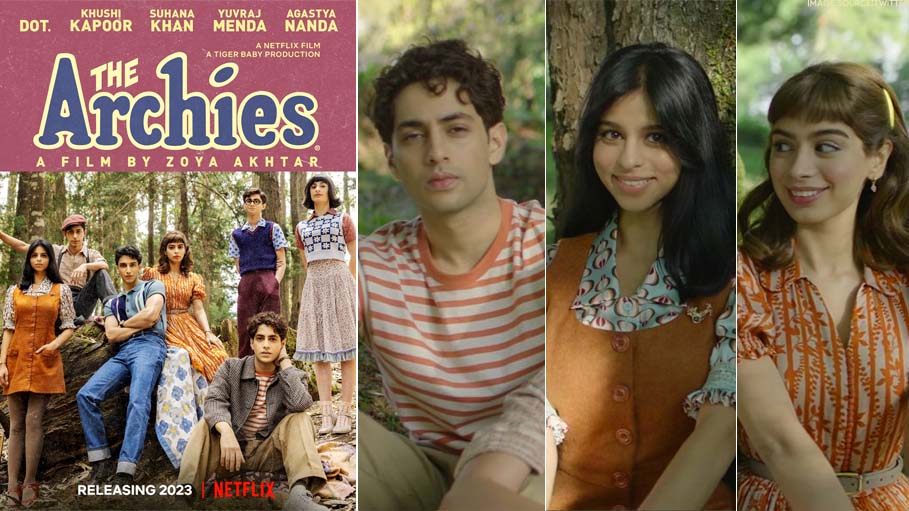 The first look of ‘The Archies’ helmed by director Zoya Akhtar was released by Netflix on Saturday. The teaser will instantly grab your attention as it is unlike any of the contemporary teasers that you’ve seen lately.

In the teaser Archie Andrews and his gang can be seen having the time of their life!

It is heartwarming to see the young stars with costumes, hairstyles, mannerisms, the backdrop and the vibe of the 60s.

The heartwarming music is the icing on the cake!

While sharing the teaser Netflix wrote, “The sun is out, the news is out! Come meet your new friends. Presenting to you the cast of The Archies, directed by the fantastic Zoya Akhtar.The Archies is set to be a musical set in the 60s.”

The film will follow the journey of the charming Archie Andrews; a student from the Riverdale High School and his schoolmates. The movie  promises to be an engaging musical experience.

It’s also the launching pad for Agastya Nanda, Suhana Khan and Khushi Kapoor. The actors have already won hearts with the teaser. Now, it’s left to be seen how the newcomers light up the silver screen with their acting prowess.

This is another factor why movie buffs would love to savour this flick as it brings forth fresh talent.

Reports suggest that Agastya will be playing the cool protagonist Archie Andrews, Suhana takes up rich and vain Veronica Lodge’s character while Khushi will portray the girl-next-door and kind-hearted Betty Cooper’s role. Mihir Ahuja will portray the comical and eccentric Jughead Jones.

Zoya Akhtar who has exhibited top-level directing skills in earlier films like ‘Zindagi Na Milegi Dobara’ has expressed mixed feelings about the release of the film. She’s super excited as well as a little nervous to present this flick in front of audiences.

“I am super excited to have the chance to bring The Archies to life. It was a large part of my childhood and teenage years. The characters are iconic and globally loved, which is also why I am a little nervous. I have to make sure the film stokes the nostalgia of a generation that grew up on the comic and yet resonates with the young adults today,” Akhtar had said in a statement.

Since the musical treat features kids of talented stars from Bollywood, the expectations from the flick is at an all time high and the teaser of ‘The Archies’ is trending currently.

Time will tell how the impressive cast will weave themselves into the characters and bring the comic characters alive. Actors Yuvraj Menda,Aditi

Dot and Vedang Raina also feature in the upcoming musical.The film will be released on OTT Platform Netflix.