‘Nostradamus in Stilettos’, the Psychic Twins Made Shocking Claims about a Secret Guest at Harry and Meghan’s Wedding

‘Nostradamus in stilettos’, the psychic twins have once again made shocking claims that there will be a secret guest at Harry and Meghan’s wedding. The secret guest will be none other than the late Princess Diana. 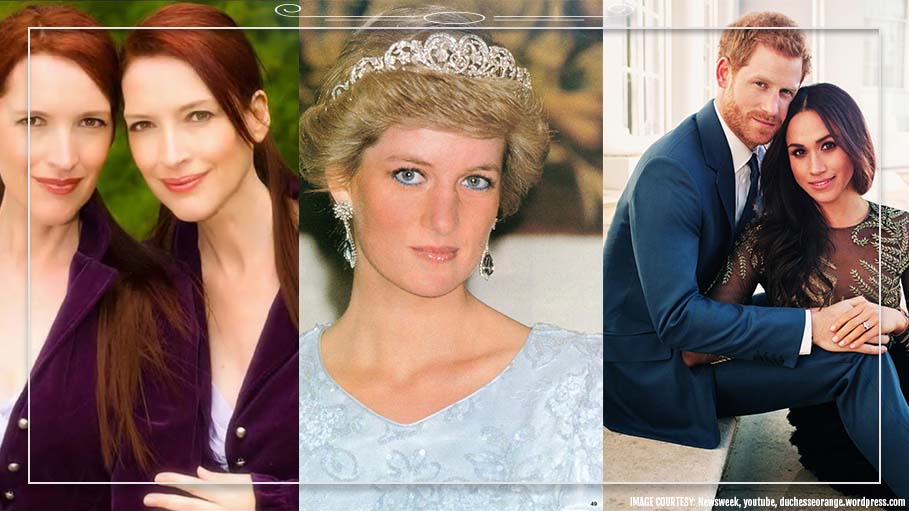 ‘Nostradamus in stilettos’, the psychic twins have once again made shocking claims that there will be a secret guest at Harry and Meghan’s wedding. The secret guest will be none other than the late Princess Diana.

They claim that they are in touch with Diana and she has supposedly stated that she will definitely be present at the royal wedding and will not miss it for the world. The twins have also stated that Diana also said she was present during William and Kate’s wedding. Prince William had claimed he felt his mother’s presence during his wedding in 2011. “When it came to the wedding, I did really feel that she was there,” he told the 2017 ITV documentary ‘Diana, Our Mother: Her Life and Legacy’. “You know, there was times when you look to someone or something for strength and I very much felt she was there for me.”

Linda and Terry Jamison are identical twins who reside in Los Angeles. They are famous for their predictions and many have been featured in tabloid newspapers and magazines. They charge $500 per person for psychic services.

They had also predicted the September 11 attacks in 1999 in a radio interview. They stated, “We are seeing terrorist attacks on Federal Government, excuse me, federal buildings,” they said in the 1999 interview on Art Bell Coast to Coast AM, a program in the US.

“Particularly South Carolina or Georgia, by July 2002 and also the New York Trade Center, the World Trade Center in 2002.”

The Jamisons who moved to Los Angeles from West Chester claim that ghosts have taken possession of them and they control them and write messages. They say that they are in contact with the spirits of Lady Diana, Michael Jackson and Natalie wood.

They have made a shocking claim that in one of their conversations with Lady Diana, she revealed that her crash was not an accident but was a well planned and executed plot in which many people were involved. They say they regularly contact Lady Diana.

Prince Harry and Meghan Markle have sent out 600 royal invites for their wedding but one will come without an invitation. Diana herself revealed to the Psychic twins that she will be present and she has also revealed what will take place at the wedding. The Jamisons claim Diana said, “It will be beautiful, a small version of my own ceremony… and with a horse and carriage. Mine was overwhelming, to say the least.” They say Diana also said, “I am around them all more than they realise!”

At the beginning of 2018, the twins predicted many scandals will be exposed in the US and there will be terrorist and cyber attacks on the US, but World war lll will not take place neither will a missile hit US. However, US will grow economically.