"Our overall loss is around ₹ 500 crore, taking into account the amount we have spent on land and construction costs," Supertech's chairman RK Arora said. 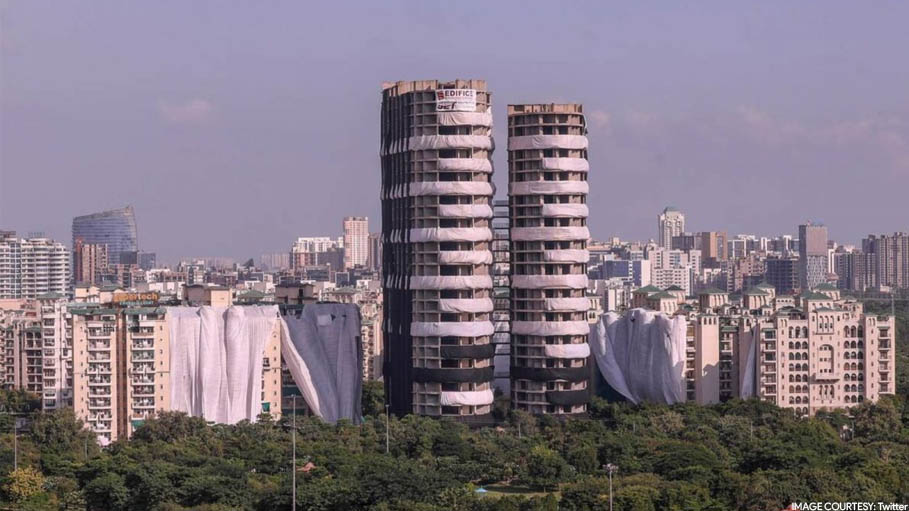 Noida: Realty firm Supertech Ltd has incurred a loss of about ₹ 500 crores, including construction and interest costs, because of the demolition of its twin towers in Noida, the company's chairman RK Arora said on Sunday.

The nearly 100-meter-tall twin towers -- Apex and Cyane -- were demolished at 2.30 pm on Sunday as per a Supreme Court order that found their construction within Emerald Court premises in violation of norms. More than 3,700 kgs of explosives were used in this operation. The cost of the demolition itself is estimated at about ₹ 20 crores.

"Our overall loss is around ₹ 500 crore, taking into account the amount we have spent on land and construction costs, the charges paid to authorities for various approvals, interest paid to banks over the years, and the 12 percent interest paid back to buyers of these two towers, among other costs," Mr. Arora told PTI.

These twin towers were part of Supertech's Emerald Court project at Sector 93 A on the Noida Expressway. The current market value of over 900 apartments in the two towers is estimated at over ₹ 700 crores.

Mr. Arora said the total built-up area in these two towers was around 8 lakh square feet.

"We constructed these towers as per the building plan approved by the Noida development authority," he added.

Asked about the demolition cost, Mr Arora said Supertech is paying ₹ 17.5 crore to Edifice Engineering, which was tasked with safely pulling down the structures, including the premium amount for a ₹ 100-crore insurance cover. In addition, there are several other costs associated with the demolition.

The edifice had roped in South African experts Jet Demolitions for the project.

In August last year, the Supreme Court ordered the demolition of the twin towers and directed that the entire amount of homebuyers have to be refunded with 12 percent interest from the time of the booking.

The Supreme Court has also ordered that the Residents Welfare Association be paid ₹ 2 crore for the harassment caused due to the construction of the twin towers.

The court had said the construction of Supertech's twin 40-story towers having 915 flats and 21 shops was done in collusion with the Noida Authority.