Peruvian archaeologists have unearthed eight children and 12 adults apparently sacrificed around 800-1,200 years ago, they said on Tuesday, in a major dig at the pre-Incan Cajamarquilla complex east of Lima. 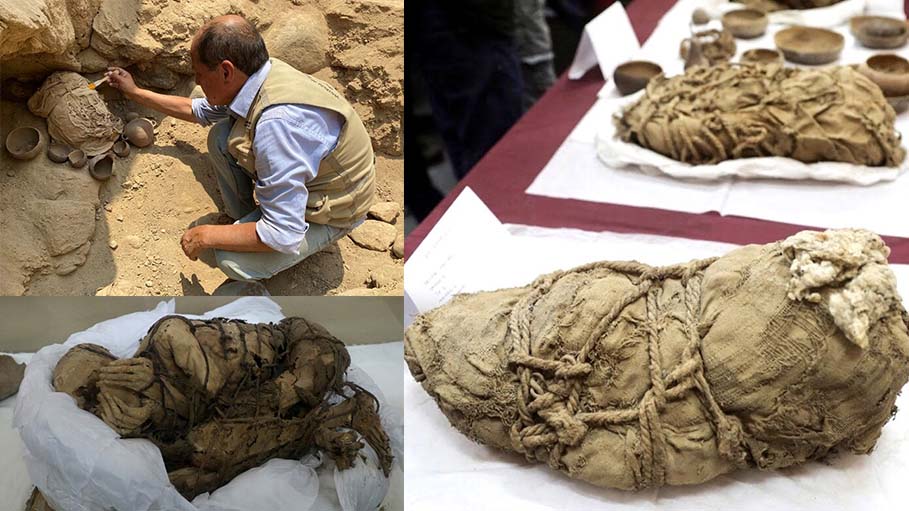 Lima: Peruvian archaeologists have unearthed eight children and 12 adults apparently sacrificed around 800-1,200 years ago, they said on Tuesday, in a major dig at the pre-Incan Cajamarquilla complex east of Lima.

The remains were outside an underground tomb where the team from Peru's San Marcos University found in November an ancient mummy thought to be a VIP bound with ropes, in a fetal position.

Archaeologist Pieter Van Dalen said the bodies, some mummified and others skeletons, were wrapped in various layers of textiles as part of ancient pre-Hispanic ritual, and had likely been sacrificed to accompany the main mummy.

"For them, death was not the end, but rather a transition to a parallel world where the dead lived," Van Dalen told a news conference. "They thought that the souls of the dead became protectors of the living."

Van Dalen said the burial pattern was familiar, citing the tomb of the Lord of Sipan, a ruler from 1,700 years ago found along with children and adults sacrificed to be buried with him.

"This is precisely what we think and propose in the case of the mummy at Cajamarquilla, which would have been buried with these people," he said. "As part of the ritual, evidence of violence has been found in some of the individuals."

Yomira Huaman, part of the team, said that along with funeral items there were musical artifacts such as the "zampona," a wind instrument of Andean origin with several wooden tubes in the form of flutes.

"Our investigations suggest the mummy of Cajamarquilla would be a man of approximately 35 years. This character did not have any organs, meaning he was eviscerated after death," she said.

Peru is home to hundreds of archaeological sites of cultures that developed before and after the Inca Empire, which 500 years ago dominated the southern part of the continent, ranging from southern Ecuador and Colombia to central Chile.

"The complex has only been excavated 1%," Huaman said. "I think Cajamarquilla has much more to say, much more to tell us."