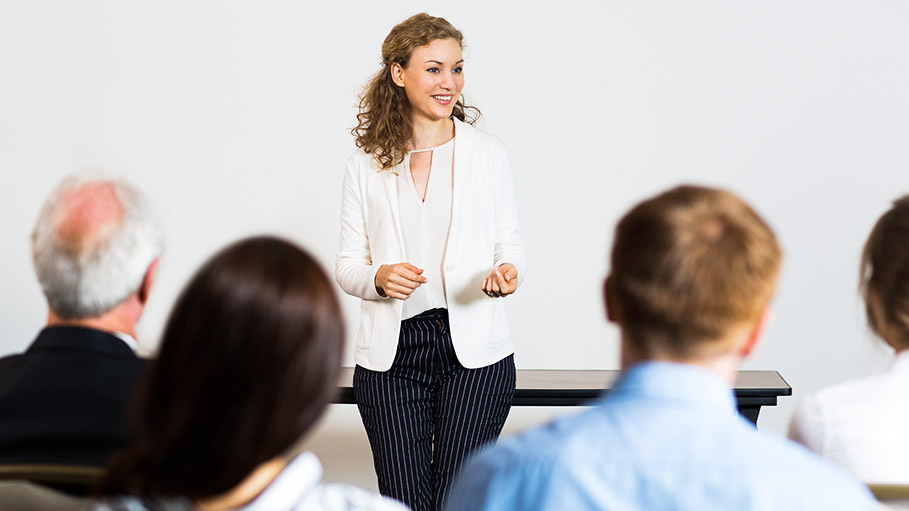 Public speaking has been touted as one of the hardest things to do by many people. Since we’re so interconnected, we feel shy to go on stage to speak in front of people. We fear rejection, public criticism and feeling a sense of guilt about not being good enough to be on stage.

Some of the most charismatic leaders in the world have been excellent public speakers. Even self-proclaimed introverts like Bill Gates and many others have had a different side to them when speaking to an audience. Everyone has a way in which they carry themselves, and public speaking is an art like any other.

It takes a lot of practice and many hits & misses, but in the end, it’s all worth it. That’s because there is so much to gain from becoming a better communicator, public speaker and presenter of big ideas and even bigger pictures. You can become increasingly motivating, convincing and influence a large group of people to work with you in return.

Some of the greatest launches in the world happen on the backs of effective public speaking. Everything a CEO announces his next product, he holds a huge press conference and talks about his innovation. That isn’t something we’re born with. We have to learn these skills first hand and try to analyze what we’re hoping to gain from it all.

Talking About What You Know

It may sound simple, but it’s the difference between a try-hard and a natural. A natural public speaker only talks about the things they know. They don’t try to overwhelm anyone with what they believe and only offer advice when asked to do so.

Some of the top natural speakers learn to master their craft after years of speaking about it and understand that they need to listen as well. That’s the difference here. You need to listen to your audience to be able to understand what they want from a speech.

Talk About the Journey Confidently

When going on-stage, try to stick to what you know and be confident about it. You can talk about the way you reached a certain conclusion, or how you wanted to know more about a certain area. When it comes to public speaking, there are no mistakes greater than someone who is talking about an area that they have no idea about.

It becomes increasingly transparent that you may have memorized a few lines, and the whole encounter becomes that much more awkward. You should talk about who you are, where you’ve been and why you’re qualified to be on stage as confidently as possible. This sets the tone for the rest of the presentation, which makes it that much more impactful in the minds of the audience.

Have a Conversation With Your Audience

When a lot of people try their hand at public speaking, they either become too shy to speak or start shouting at the audience. They become someone totally different and adapt a fake persona to get through the nightmare.

That’s the wrong way to approach public speaking. Whether you’re a CEO or a low-level manager, you need to have a conversation with your audience. You want to keep them engaged with a conversive tone. You don’t want to loudly go over talking points and not get their input.

You also don’t want to be on stage for too long. That’s another sign that you’re not fully prepared about what you’re trying to say. Try to balance out the factors and have a natural conversation with the audience. Even if you’re speaking to thousands, you’re still only having a conversation with one person at a time.

Understand the Mood of the Room

If you’ve been prepared to speak slowly, but the presenters before you have been boring, you may lose the crowd. If you’re too powerful and the room is full of senior managers, you may feel a sense of disconnect. You want to be able to gauge how the room is.

This is a great trick picked up from the stand-up comedy world, which works when you’re trying to appeal to the conversational side of people. You need to speak a few sentences to get their reaction and then act accordingly.

This is also a great way to ensure that you’re using your word as conservatively as possible and not offending anyone in exchange. Public speaking requires a balance of power, and you never want to give away too much of it to someone else.

Go Back to the Core

Whether you’re urging people to change a habit, or engaging them to purchase your software platform, you need to go back every time you walk too far away. This is a great way to ensure that you’re not wasting anyone’s time and you’re having a good time on stage as well.

By staying close to the message at hand, you also get the attention of a larger section of the audience. Once you’re hitting the sweet spot, you can stay in that zone for as long as possible.

Public speaking is one of the most important skills to obtain, and it takes time and effort to power through it. For many, it’s a challenging development to oversee, but leaders that see their vision through can speak with honest conviction about their actions. Public speaking has also become a key determining factor between your next promotion and your next sales pitch. These skills are often invaluable in the eyes of any organization.

How Can You Boost E-Commerce Sale with SEO Tactics

Holi 2019 Skin Care Tips: How to Protect Yourself from Harsh Colours