Apple Inc is going to invest in building its second campus in North Austin, Texas and another $10 billion for new data centers with the aim to create 20,000 jobs in the United States. 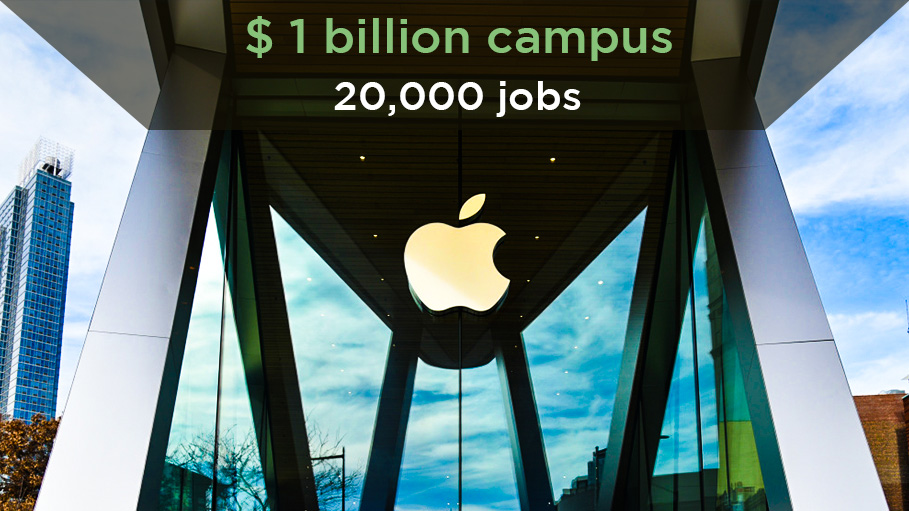 Apple Inc has declared that it is soon going to expand its presence in the US, as a part of a billion dollar investment. The company is going to invest in building its second campus in North Austin, Texas and another $10 billion for new data centers with the aim to create 20,000 jobs in the United States.

The announcement is seen as a follow up of the promise by Apple in January this year to invest $30 billion in the United States. As for major manufacturing operations outside America, Apple has been facing political pressure to increase its investments at home. US President Donald Trump has also warned Apple of slapping tariffs on iPhones and other Apple products, which are imported from China.

Apple CEO Tim Cook said in a press release, “Apple is proud to bring new investment, jobs and opportunity to cities across the United States and to significantly deepen our quarter-century partnership with the city and people of Austin. With this new expansion, we are redoubling our commitment to cultivating the high-tech sector and workforce nationwide”.

Now the new 133 acre campus at Austin, which is already the home for the second largest number of Apple employees outside Cupertino and which will be located less than a mile away from Apple’s present facilities. Initially it will house 5000 new employees, but have the capacity to expand upto 15000. The jobs in the new Austin center would include research and development, engineering, finance and sales functions.

The Governor of Texas Greg Abbot and the Mayor of Austin Steve Adler has welcomed this move by the Tech giant. In a statement, he said, “Apple has been a vital part of the Austin community for a quarter century, and we are thrilled that they are deepening their investment in our people and the city we love”.

On the other hand, Governor of Texas, Greg Abbot praised the iPhone maker as one of world’s most innovative companies and a creator of jobs in his state. He said, “Their decision to expand operations in our state is a testament to the high-quality workforce and unmatched economic environment that Texas offers”.

Apple’s tech rival Amazon.com Inc has searched and moved to its new headquarters recently, picking America’s political and financial capitals for its big new offices with the plan to create thousands of jobs in US.

Apple is also planning to have its branches in Seattle, San Diego and Culver City in California. In the meantime it will expand its operations in New York, Pittsburgh and Boulder, Colorado in next three years. Apple also announced that it has added 6,000 jobs to its US operations this year and plans to hire more than 1,000 employees each in Seattle, San Diego and Culver City.

Apple has a market capital of about $803 billion, making it one of the world’s most valuable firms, but recently the company’s stock price has suffered much because of declining demand for new iPhones.