The photograph in which John Lennon is seen leading the band members Ringo Starr, Paul McCartney and George Harrison over the crossing is instantly recognised across the world. 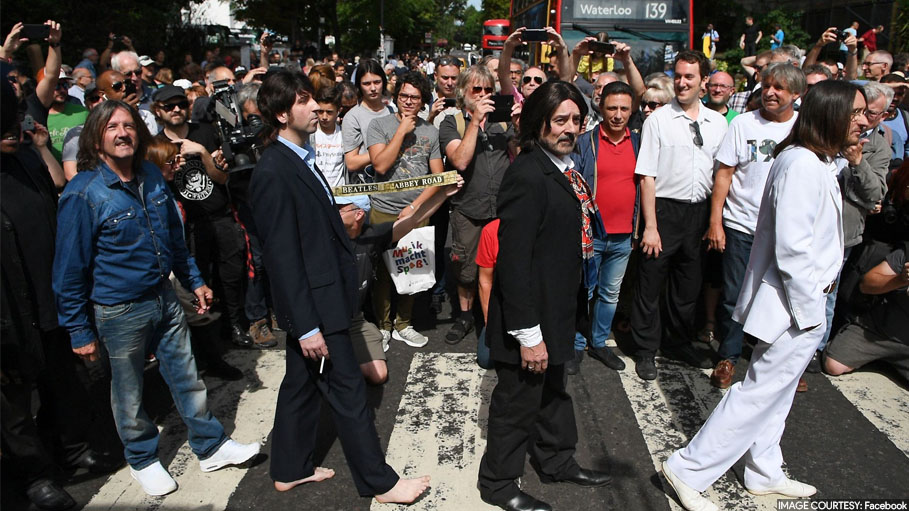 Thousands of Beatles fans came together in London to celebrate the 50th anniversary of the band’s iconic zebra crossing picture for the ‘Abbey Road’ album cover.

It was Beatles mania all over, when fans across the world assembled to recreate the moment on the pedestrian crossing outside the Abbey Road Studios, exactly five decades from the moment when Britain’s legendary Favorite Four walked over it for the sleeve of their final studio album.

The photograph in which John Lennon is seen leading the band members Ringo Starr, Paul McCartney and George Harrison over the crossing is instantly recognised across the world.

Beatles fans gathered around with guitars to sing songs and there were peace signs a-plenty, which brought the traffic to a standstill for sometime.

66-year-old Mary Anne Laffin, who flew in from New York to be at what she called a ‘holy shrine’. As a youngster, she ran on the pitch when The Beatles played at New York’s Shea Stadium in 1966.

Recalling the moment she said, “I was 12 years old, saved up $5.50 to get a ticket and it was like being in heaven for 38 minutes. I was so overcome that I climbed over all the seats and ran, trying to get to the stage. I got carted off by the police”.

She also added, “Today, it is exciting to see all these people, that also love them, and how much they have meant to the world”.

The idea for the cover photo came up from a sketch by McCartney of stickmen on the zebra crossing. The picture was then planned and Scottish photographer Iain Macmillan took the photograph around 11:35 am on August 8, 1969.

In a 10-minute shoot, Macmillan took six frames, of which the fifth frame was used, the only one with the band stepping in unison over the six white zebra stripes. Macmillan standing on a stepladder in the middle of the street took the picture, while traffic policeman stopped the traffic.

Publicist Tony Bramwell said, “They needed a picture for the album sleeve. Paul had this vague idea of what it should be like. The day before, Macmillan did some test shots. The Beatles crossed the road three or four times and that was it. It’s an iconic photo, it’s an iconic record that Changed history”.

‘Abbey Road’ was released on September 26 that year, six days after Lennon privately declared about his decision to quit the group. The album ‘Abbey Road’ has 17 songs that include Starr’s ‘Octopus’s Garden’, Lennon’s ‘Come Together’, Harrison’s ‘Here Comes the Sun’ and ‘Something’ and the closing medley of scraps of unfinished songs largely by McCartney.

The record rounded off their career and its eye-catching sleeve, which though did not feature the name of the band or the record, but became all-time classics.

It is the celebrations that have drawn Beatles fans from across the world ever since, with a large number of fans walked over the zebra crossing replicating the iconic picture.