Know who are the winners of the ESPNcricinfo Awards for 2018. 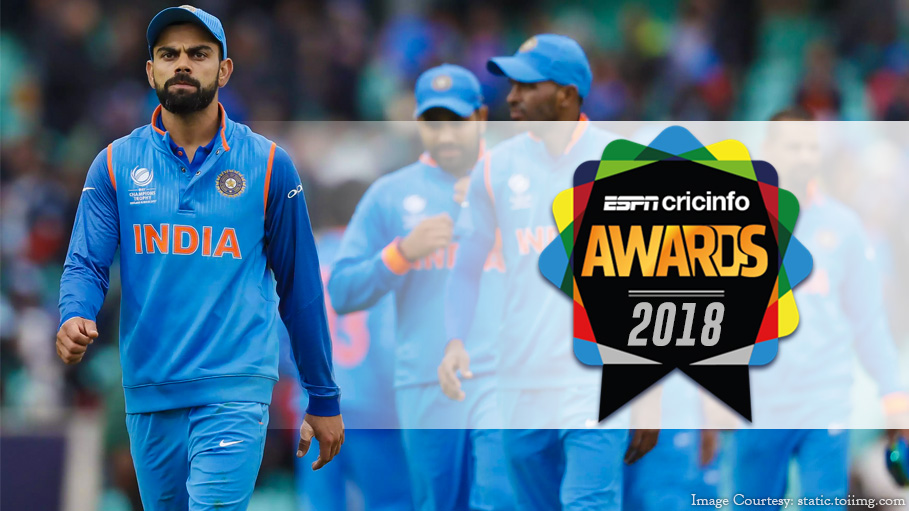 ESPNcricinfo, the go-to digital destination for all things cricket, on Monday announced the winners of the ESPNcricinfo Awards for 2018. Like last year, Team India had much to celebrate, winning five out of 12 awards, including a clean sweep in bowling across formats – Tests, ODIs and T20Is.

Cheteshwar Pujara, nominated alongside the likes of Virat Kohli and AB de Villiers, won the award for Test Batting Performance of the Year for his innings of 123 runs that helped India claw their way back in the Adelaide Test after a shaky start on the tour of Australia, and laid the platform for a landmark series win. Thanking ESPNcricinfo for the award, Pujara said that winning this series overseas in Australia was special. But to win that series, a good start was very important. At one point we were 40 for 4. Then he had a little partnership with Rohit [Sharma] and then [R] Ashwin, but soon after, he had to bat with the tailenders. He spent a couple of sessions at the crease and then accelerated because he had tailenders at the other end, he said.

Jasprit Bumrah won the Test Bowling Performance of the Year for his 6 for 33 in Melbourne, which took India 2-1 up in the series. Last year’s Debutant of the Year, Kuldeep Yadav, bagged the bowling awards for ODIs and T20Is for his match-winning performances against England in Nottingham and Manchester respectively.

Ross Taylor and Glenn Maxwell won the batting awards for ODIs and T20Is. Taylor’s remarkable 181 not out against England, a large part of it played on one leg, came in a chase of a steep 336. Maxwell’s unbeaten 103, also against England, came off 58 balls.

Australia’s Meg Lanning won the Captain of the Year award, for which she was pitted against Virat Kohli, Faf du Plessis, Rohit Sharma, and Joe Root. Lanning led Australia to wins in the World T20 and in tri-series against New Zealand and India.

Scotland’s Calum MacLeod, whose unbeaten 140 led Scotland to their first ever victory against England, won in the Associate Batting category. His team-mate Safyaan Sharif made it two in two for Scotland, winning the bowling award for his five-wicket haul against Zimbabwe in the World Cup Qualifier.

Sam Curran, England’s find of the year, won the award for Debutant of the Year. Curran made his Test debut aged 19 against Pakistan at Headingley in June 2018, and won his first Man-of-the-Match award one match later, when his four first-innings wickets and a thrilling counterattacking half-century after England were 87 for 7 gave his side the edge in the nail-biting Edgbaston Test against India. The debate about whether batting or bowling will ultimately become his strongest suit gained momentum after that.

Sambit Bal, editor-in-chief, ESPNcricinfo, said that 2018 was an exciting year for international cricket and witnessed thrilling performances from teams across the world. Each nominee made a compelling case, and the winner for every category was chosen after much debate. It was a reflection of India’s success across the formats that the country produced five ESPNcricinfo Awards winners for the year, with Pujara and Bumrah bagging their first-ever awards. In all, there are nine first-time winners this year and that those include Meg Lanning, who led Australia’s winning campaign in the Women’s World T20 is a mark of the growing profile of the women’s game, he said.