ELSA Corp. is a rising star startup founded in San Francisco with an engineering office in Lisbon. Their overall vision is to enable everyone to speak foreign languages with full confidence, which helps to reach a better life and career opportunities. 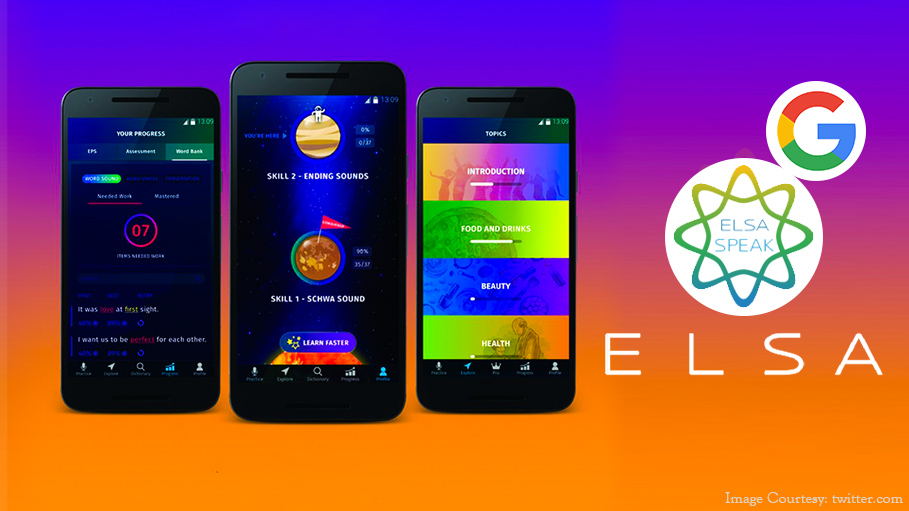 Learning English has never been as interesting as this! Google-funded ELSA (English Language Speech Assistant and not the popular Disney character!) has launched in India to improve English speaking skills of the Indian Language learning community. Unlike other applications, courses that focus primarily on teaching vocabulary and grammar, ELSA uses speech recognition technology to help English learners with their pronunciation. It figures out where the pronunciations mistakes are and shows how to improve. 800,000 people used ELSA to improve their pronunciation score by 40 percent in under 4 weeks.

ELSA Corp. is a rising star startup founded in San Francisco with an engineering office in Lisbon. Their overall vision is to enable everyone to speak foreign languages with full confidence, which helps to reach a better life and career opportunities. In India, the status of a person is often concluded by knowledge and fluency of English, and for millions, knowing fluent English means a much better chance of employability. A recent report by KPMG stated that the e-learning market in India, is expected to grow at 42 percent by 2021.

Ankit Raj, who is looking after growth of ELSA in India, said that with the advent of Reliance Jio, increased smartphone and high-speed internet usage among the masses, there has been a sudden explosion in demand for English learning platforms. This is where ELSA is trying to fill the heavily ignored but essential gap of correct pronunciation and accent.

ELSA has raised $7 million in March, 2019 for its A.I. - assisted language learning platform that helps people with improving their English pronunciation. Their lead investor for this new phase of its company was Gradient Ventures, Google’s AI-focused venture fund. Over the past year, ELSA has been on a path of exponential growth. It claims to have made an impact by assisting a community of more than 4 million English learners enhance their pronunciation. As a result, the learners were exposed to better opportunities whether at school, travel or work.

Vu Van, CEO of ELSA, said that they are looking to repeat the growth story in India after major success in Vietnam & Japan. India is one of the largest markets for English e-learning and we want to leave no stone unturned by going after online and offline channels to acquire customers.

In a country with so many diverse languages -- 20 official languages, English, is the only common language among native speakers of all regions, and is predominantly becoming the mother tongue in urban households. Having realized this, ELSA wants to be the de-facto platform for pronunciation and accent coaching in India.

Interestingly, the company is now building a business operations team in Tokyo and is on a hiring spree across the board.