The Hague: Myanmar's junta is set to replace Aung San Suu Kyi at the UN's top court Monday as it seeks to dismiss a case over the alleged genocide of Rohingya Muslims. 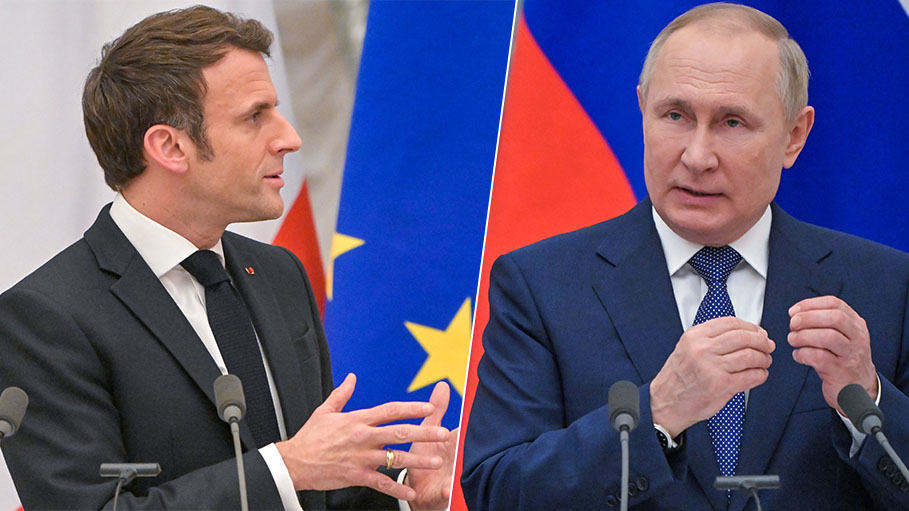 Kyiv: Last-ditch diplomatic efforts were underway on Sunday to prevent what Western powers warn could be the imminent Russian invasion of Ukraine and a catastrophic European war.

Macron met Putin on February 7 and has since, along with fellow Western leaders like Germany's Chancellor Olaf Scholz, been urging his Russian counterpart to pull back from the brink of war.

More bombardments were heard overnight close to the frontline between government forces and the Moscow-backed rebels who hold parts of the districts of Lugansk and Donetsk.

"Every indication indicates that Russia is planning a full-fledged attack against Ukraine," NATO chief Jens Stoltenberg said, echoing US President Joe Biden, who believes the invasion is imminent.

The Moscow-backed separatists have accused Ukraine of planning an offensive into their enclave, despite the huge Russian military build-up on the frontier.

Kyiv and Western capitals ridicule this idea, and accuse Moscow of attempting to provoke Ukraine and of plotting to fabricate incidents to provide a pretext for a Russian intervention.

"Our enemy wants to use this as an excuse to blame Ukraine and moving in regular soldiers of the Russian armed forces, under the guise of 'peacekeepers'," the military chief of staff said.

The rebel regions have made similar claims about Ukraine's forces and have ordered a general mobilisation, while staging an evacuation of civilians into neighbouring Russian territory.

Officials with the Lugansk rebels claimed Sunday they had repulsed an attack by Ukrainian forces that had left two civilians dead, but the Ukrainian interior ministry immediately denounced the claim as an "absolute fake".

Russian investigators said they had opened a probe into the alleged incident.

Russia, according to Western leaders, has more than 150,000 troops along with missile batteries and warships massed around Ukraine, poised to strike.

Some 30,000 of these troops are in Belarus, ostensibly for an exercise alongside Putin ally Alexander Lukashenko's forces, but also close to the Ukraine frontier and the road to the capital Kyiv.

All eyes were on this force Sunday, the day when the exercises are scheduled to end. If Putin fails to withdraw them to Russia as promised, this will be seen as a further escalation of the threat.

Ukrainian President Volodymyr Zelensky told Macron on Saturday he would not respond to Russia's provocations, according to the Elysee.

But in his speech to the Munich Security Conference, he also condemned "a policy of appeasement" towards Moscow.

"For eight years, Ukraine has been holding back one of the greatest armies in the world," he said.

He called for "clear, feasible timeframes" for Ukraine to join the US-led NATO military alliance -- something Moscow has said it would never accept, as it tries to roll back Western influence.

Western officials in Munich warned of enormous sanctions if Russia attacks, with US Vice President Kamala Harris saying this would only see NATO reinforce its "eastern flank".

On Saturday, from the Kremlin situation room, Putin and Lukashenko watched the launch of Russia's latest hypersonic, cruise and nuclear-capable ballistic missiles.

Putin has also stepped up his rhetoric, reiterating demands for written guarantees that NATO roll back deployments in eastern Europe to positions from decades ago.

The volatile front line between Ukraine's army and Russian-backed separatists has seen a "dramatic increase" in ceasefire violations, monitors from the OSCE European security body have said.

Hundreds of artillery and mortar attacks were reported in recent days, in a conflict that has rumbled on for eight years and claimed more than 14,000 lives.

The OSCE said there had been 1,500 ceasefire violations in Donetsk and Lugansk on Friday alone, and AFP reporters in the area have heard heavy shelling since.

On Saturday, a dozen mortar shells fell within a few hundred metres (yards) of Ukraine's Interior Minister Denys Monastyrskiy as he inspected a frontline position with journalists in tow.