Dressed in military camouflage with an assault rifle at the ready, "Prof" Yeh peers from behind a vehicle in a parking lot outside Taipei, scanning his surroundings and waiting for a signal to advance. 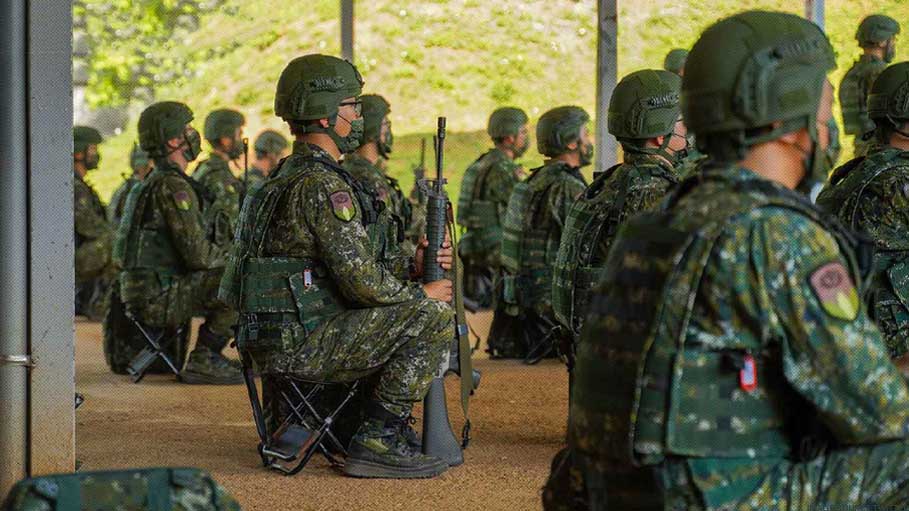 New Taipei City: Dressed in military camouflage with an assault rifle at the ready, "Prof" Yeh peers from behind a vehicle in a parking lot outside Taipei, scanning his surroundings and waiting for a signal to advance.

Yeh actually works in marketing, and his weapon is a replica -- but he is spending the weekend attending an urban warfare workshop to prepare for what he sees as the very real threat of a Chinese invasion.

"The Russia-Ukraine war is a big reason why I came to this workshop," 47-year-old Yeh, whose call sign during training is "Prof", tells AFP during a break between sessions.

When Russian President Vladimir Putin ordered his troops to invade Ukraine at the end of February, he gave shape to the darkest fears of many Taiwanese.

The self-governed democracy lives under constant threat from authoritarian China, which views the island as part of its territory and has pledged to take it one day.

But the war in Ukraine has also inspired Yeh.

The resilience of Ukrainian forces has given him hope that with the right tactics, Taiwan too might have a chance defending itself against its much mightier neighbour.

He is not alone -- the organisers of the urban combat course say their students have nearly quadrupled since February. Firearms and first aid courses have also seen increased enrolment.

Disquiet over China was brewing in Taiwan long before the Russian invasion.

Max Chiang, CEO of the company that organises the workshops, says there has been "a heightened sense of crisis" among Taiwanese people since 2020, when Chinese warplanes began making regular incursions into the island's air identification zone.

Roughly 380 sorties were recorded that year -- a number that more than doubled in 2021, and is on track to do so again this year, according to an AFP database.

China comprehensively outnumbers Taiwan militarily, with over one million ground force personnel to Taiwan's 88,000, 6,300 tanks compared with 800, and 1,600 fighter jets to 400, according to the US Department of Defence.

But Ukraine has provided a practical blueprint for how to make that disparity matter less.

It has vividly demonstrated how fighting for control of cities can be difficult and costly for attacking forces -- and most of Taiwan's 23 million people live in urban areas.

As Yeh and his 15 teammates run in staggered column formation across the parking lot, stooping behind dilapidated buildings and vehicles to simulate attacks on enemy positions, they are trying to put some of the lessons learned in Ukraine's devastated cities into practice.

"To put it bluntly, annihilate the enemy and stop any enemy advances."

'Resolve of the people'

In a warehouse beside the parking lot, 34-year-old Ruth Lam is learning to fire a handgun for the first time.

Lam, who works at an emergency vehicle lights manufacturer, said that most of her European clients had told her there would not be a war in Ukraine.

"But it happened," she says.

She is hoping that knowing how to handle a gun might protect her and her family if there is war, and is planning to continue target practice with friends.

"Prepare your umbrella before it rains," she says. "We don't know when things are going to happen."

In a survey conducted in May, 61.4 percent of respondents said they were willing to take up arms in the event of an invasion.

"The will of the Ukrainian people to fight against aggressors has increased the resolve of Taiwanese to safeguard their homeland," Chen Kuan-ting, CEO of Taiwan think-tank NextGen Foundation, tells AFP.

Lin Ping-yu, a former paratrooper who came to the urban warfare class "to brush up on his combat skills", concurs.

"Only when a country's citizens have the strong will and determination to protect their land can they convince the international community to come help them," the 38-year-old says.

Yeh believes it is a question of when, not if, they will be called to put their new skills into action.

Citing the example of Hong Kong, where Beijing has moved to consolidate its grip in the last few years, he says simply: "Taiwan is next."