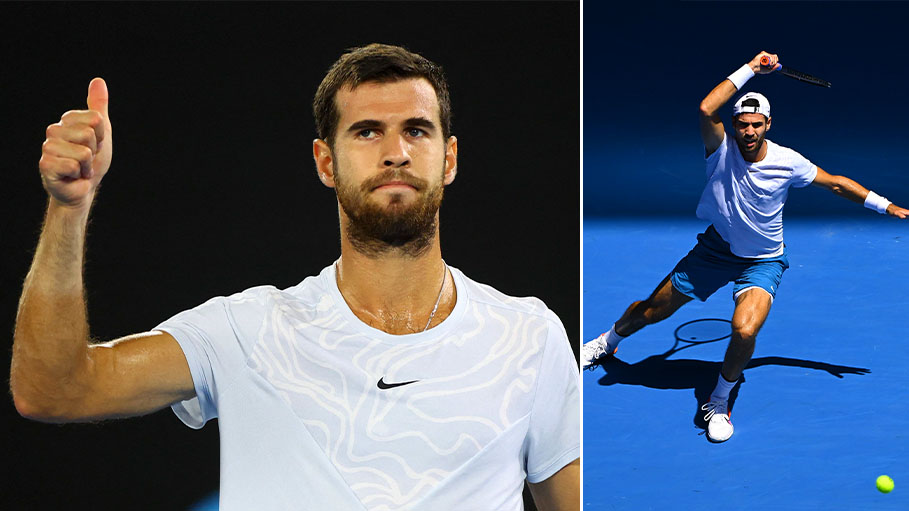 Karen Khachanov reached his second consecutive Grand Slam semi-final on Tuesday when Sebastian Korda retired hurt at the Australian Open, ending the young American's dream of emulating his father Petr's 1998 title run. Korda needed treatment on a wrist injury in the second set of their quarter-final before calling it quits when trailing 7-6 (7/5), 6-3, 3-0 to the Russian 18th seed on Rod Laver Arena. Khachanov's reward is a clash with either Greek third seed Stefanos Tsitsipas or unseeded Czech Jiri Lehecka, who play later, for a spot in Sunday's final.

Victory equals the 26-year-old's best performance at a major after his semi-final run during last September's US Open, where he lost to Norway's Casper Ruud.

The Olympic silver medallist, who has won four Tour-level titles, came into the match with far greater experience at this stage of a Grand Slam than Korda, having reached the last eight at all four majors.

In contrast, the 22-year-old Korda was in his first quarter-final.

Khachanov also had a far easier ride in the fourth round, routing Japan's Yoshihito Nishioka in straight sets while Korda slogged through a five-set thriller against Hubert Hurkacz.

"I think until a certain point it was very competitive, a very good battle," said Khachanov.

"He beat my friend Daniil (Medvedev) in three sets and won in five sets against Hurkacz so you know he is playing great. So applause to him.

"I'm feeling good to be honest and really happy about the way I'm competing," he added. "I'm looking forward to the semi-finals here in Australia for the first time."

Khachanov, who reached a career-high ranking of eight in 2019, opened with a serve to love, then reeled off an easy break to go 2-0 clear with Korda's early nerves apparent.

The American finally got off the mark to hold for 3-1 when Khachanov flayed a cross-court forehand wide.

But with the Russian blasting down aces and winning more than 90 percent on his first serve, the chances to break back were few and far between.

However, a wayward backhand as Khachanov was serving for the set handed Korda his first break point opportunity and he grabbed it with both hands.

It went to a tiebreak, where Khachanov held his nerve, sealing it on his third set point with a blistering backhand down the line.

Korda needed treatment on his right, serving, wrist at 3-2 in the second set. He returned with it strapped but was immediately broken.

The Russian consolidated and with Korda struggling, flexing his wrist between points, he broke again to take a two-set lead.

Korda left the court at the changeover, clearly in trouble. He continued but lost the opening 10 points of the third set before retiring.