MLA Brings Cow to Assembly, It Runs away: Rajasthan 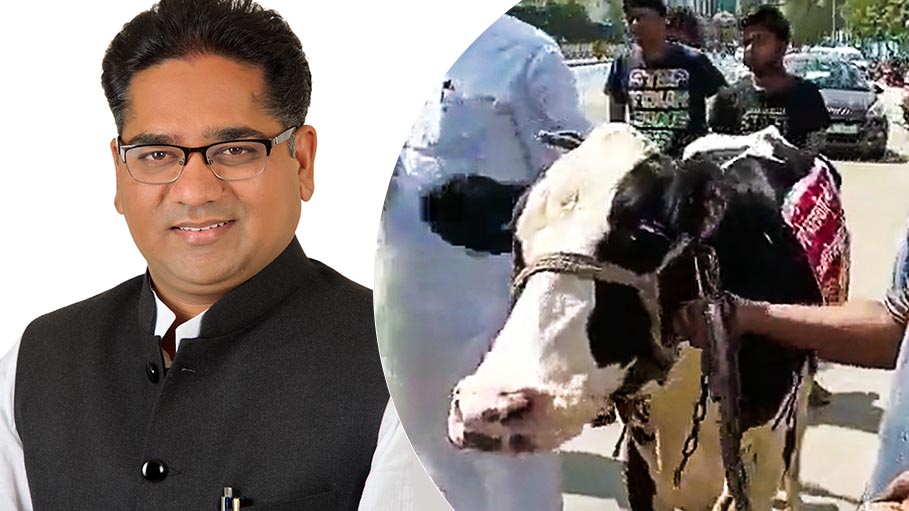 Jaipur: A BJP legislator on Monday brought a cow outside the assembly premises to draw state government's attention towards the lumpy skin disease.

BJP MLA from Pushkar assembly constituency Suresh Singh Rawat reached there with a cow and started moving towards the assembly premises.

However, as the legislator was talking to the media persons, the cow went berserk due to the excessive noise and ran away from the spot. The legislator's supporters were seen trying to catch hold of it.

The seventh session of the Rajasthan Legislative Assembly resumed on Monday.

Holding a stick in his hand, the MLA told reporters that cows are suffering from lumpy skin disease but the state government is in a deep slumber.

"To draw attention towards lumpy disease, I brought a cow to the Vidhan Sabha (campus)," Mr Rawat said.

As the cow ran away, he said, "See, the 'Gau Mata' is also angry with the government." He demanded from the government that arrangements should be made for medicines and vaccines etc. to take care of cows who are affected by the disease.

Inside the House, three Rashtriya Loktantrik Party (RLP) MLAs sat on a dharna in the Well of the House and raised slogans.

Before the session started, Chief Minister Ashok Gehlot told reporters that the central government should declare lumpy disease as a national calamity.

He said, "Our priority is how to save the lives of cows from lumpy skin disease. The Centre has to give the vaccine and medicines, so in such a situation we are demanding the Centre to declare it a national calamity."